Alex Cejka was disqualified in the first round of the Honda Classic on Thursday for violating the new greens-reading regulations that went into effect at the start of the new year.

Cejka’s disqualification, which came when he was even-par after he had already played 14 holes of golf on Thursday, was a result of him using “greens-reading materials that did not fit the new scale” permitted by the new Rules of Golf, according to PGA Tour rules officials.

Cejka’s greens-reading material was deemed as too large by PGA Tour officials. He becomes the first player on the Tour to be disqualified for violating the new greens-reading regulations.

Cejka’s playing partner, Cameron Tringale, noticed that Cejka was using an old book when he walked past Cejka on the 10th green studying the book as he lined up for a putt.

“I saw it and told my caddie,” Tringale said to Golf Digest. “I mentioned it to [Cejka] but was unfamiliar how exactly to proceed. I told the first official I saw what I had seen.”

“I was perplexed,” Tringale continued. “That doesn’t look right. Did I really see that?” 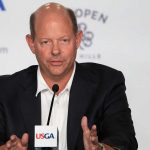 You may also like USGA, R&A chiefs differ on success of new rules rollout

“It was brought to the committee’s attention that Alex might possibly be using some old greens reading materials, and so we were obligated to check it out,” PGA Tour rules official Robby Ware said. “Alex was basically using an old yardage book and old green readings material that did not fit the size to scale limit. The new scale limits are obviously much smaller. That was the violation.”

“He knew he was using an old book,” Ware continued. “He told me that. I don’t know that he was completely understanding of what the scale limits are.”

At the start of the new year, the USGA implemented a new rule on what materials can and cannot be used when reading the greens during a competitive round.

The new rule of limiting the usage of greens-reading materials on the course was made with the USGA’s belief that “the ability of golfers to read greens using their own judgment is an essential skill that should be maintained,” and the interpretation “limits the size and scale of detailed putting-green maps and any similar electronic or digital materials that a player may use during a round to assist with reading his or her line of play on the putting green.”

Ware informed Cejka of the violation on the 13th hole and escorted Cejka off the course on a golf cart after the 14th hole.