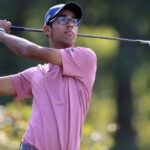 Akshay Bhatia is playing in his sixth PGA Tour event of the season.

For most kids Bhatia’s age, mid-August marks the beginning of their college journey — packing up their rooms, saying goodbye to lifelong friends and embarking for various campuses throughout the country. For Bhatia, mid-Augusta means prepping for the Wyndham Championship — his first PGA Tour event since becoming a legal adult.

A teenager playing in a Tour event is nothing new — Jordan Spieth famously made the cut at the Byron Nelson as an amateur at the age of 16. But Spieth, and others who have played in events so young, went back to the junior and amateur ranks before turning pro. That had no appeal for Bhatia, who turned pro last September.

“It’s crazy to think that like this month I would actually be going to college for my first year,” Bhatia said ahead of the Wyndham Championship. “It just didn’t ever cross my mind that I wanted to do — you know, go to school. All my mind was set on was just playing golf and playing on the PGA Tour and playing pro golf.”

But the success Bhatia saw at the junior and amateur levels hasn’t come as easily since he’s jumped to the pro ranks. He missed his first five cuts on Tour playing on sponsors exemptions, and he failed to advance past the second stage of last fall’s Korn Ferry Tour Q school. He did earn status on the Mackenzie Tour, but with pandemic-related coronavirus travel bans, the season was scrapped in May, leaving Bhatia to fend for himself on the mini tours and playing the Monday qualifier game.

“I’ve just kind of always had that mentality of just learning the hard way,” Bhatia said.

That mentality is starting to pay off for the young prodigy. Last week, Bhatia claimed his first victory as a professional — a three-stroke win on the SwingThought Tour in Hilton Head, S.C. That was just the kind of confidence boost he needed heading into the Wyndham on his last sponsors exemption of the season.

“It was just an amazing feeling know that obviously I didn’t have — obviously I played well, but I didn’t feel like I had my A-game,” Bhatia said. “Just knowing that if I have my B- or C-game, that I can still perform at a high level.”

Posting a solid finish at the Wyndham will surely require his A-game, but his game is trending in the right direction. If he does play poorly, though, comfort inside the ropes on the PGA Tour won’t be to blame. Bhatia is friendly with several of Tour pros and has picked their mind plenty on what it will take to elevate his game.

During his PGA Tour debut at the Valspar Championship last spring, Bhatia got to play a practice round with now No. 1-ranked player Jon Rahm, even besting the Spaniard in a closest-to-the-pin competition. Bhatia called it one of his “coolest stories” of being out on Tour.

But being the youngest player in a field of pros, Bhatia does run into some generational gaps in knowledge with his playing partners.

“My caddie and I, we talk all the time about TikTok, Instagram, just funny stuff,” he said. “(But) we kind of keep it to ourselves because some of it might not be appropriate to some of these older guys or they won’t understand.”

For Bhatia to become a mainstay on the Tour, he’ll need a finish near the top of the leaderboard to secure special temporary membership. While that may be unlikely, it is 2020 — stranger things have happened. And if not, he has plenty of time to grow.