5 surprising players who just made it through Q-School 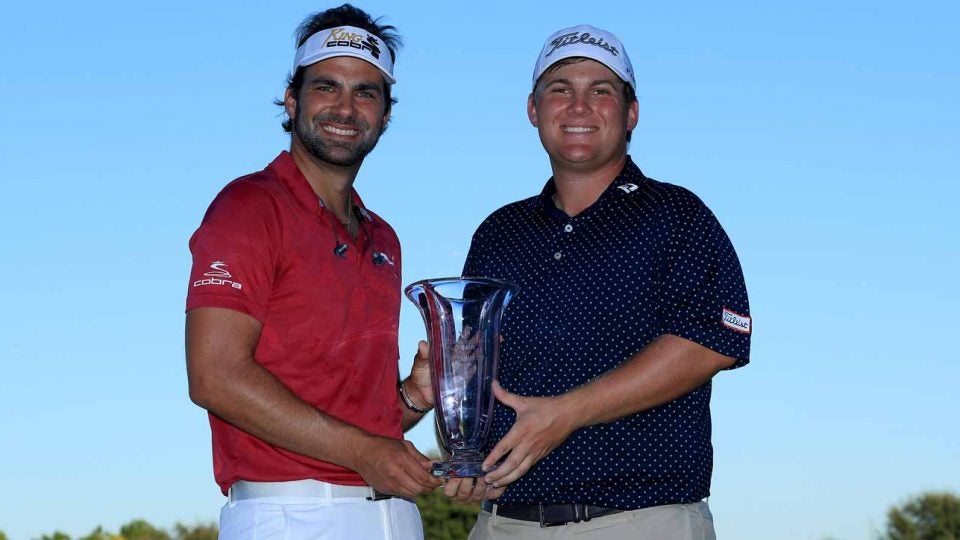 Technically, every player who’d made it to Q-School Finals had already earned Korn Ferry Tour status for 2020. But anybody who’s ever boarded an airplane knows that there’s status and there’s status; each of the 154 players in the field was looking for the latter. The medalist earned fully exempt status for the entire season, while the top 10 (and ties) earned 12 guaranteed starts and the rest of the top 40 (and ties) earned eight guaranteed starts.

After four rounds at Orange County National in Winter Park, Fla. we know who cracked that top 40 — and the list includes some familiar figures. To get you through that post-Presidents Cup hangover (and to get you excited for golf in the new year) here are five names from the list that you might not have seen coming.

Whenever they cut to a shot of Sam Saunders on a broadcast, TV commentators always bring up that he’s Arnold Palmer’s grandson — them’s the rules. The Curtis Thompson equivalent is the mandatory mention that he’s Lexi Thompson’s older brother (his older brother Nicholas was at Finals, too, but finished T53). He’s a successful caddie, too: just after Lexi split with caddie Kevin McAlpine, Curtis picked up the bag in late 2018 and Lexi won for the first time in more than a year.

But Thompson re-proved this week that he has a complete game himself, too. The 27-year-old shot 21-under for the four rounds to share medalist honors and will be fully exempt through this year’s Korn Ferry Tour schedule. Thompson previously played the KFT from 2015-18 and became known for his prodigious length off the tee (leading the tour in driving distance three consecutive years), but after struggling with results wasn’t sure if he would continue playing. Looks like it was a good call to do so.

News
5 surprising players who just made it through Q-School

In golf, the only problem with being a can’t-miss prospect is that there’s actually no such thing. Braden Thornberry knew that forgoing his senior season at Ole Miss to turn pro a year ago meant taking a risk, and when he made just six cuts in 14 starts he had to head back to Q-School anyways. Now, after making seven birdies on the front nine Sunday, he’ll have the ability to set his own schedule going forward. Thornberry is the former No. 1 amateur in the world and the 2017 NCAA Champ; the smart money is on his having a strong 2020.

Few people in golf can lay claim to a better name than Taggert “Tag” Twain Ridings, an Oklahoma native who has bounced around the PGA Tour and lower developmental tours for two decades. At 45 years of age, Ridings was the second-oldest player in the field but finished T21 to earn a solid slate of starts in the new year. Ridings played in his first major championship in 2000, and we’re sure you remember his win at the 2002 Buy.com Permian Basin Open. He made seven of 16 cuts on last year’s Korn Ferry Tour and will look to improve on that effort in 2020. His best PGA Tour finish in recent years came from a T3 at the 2017 Barbasol Championship.

Remember that thing I wrote earlier about golf not providing any guarantees? Still true two paragraphs later. Australian prodigy Ryan Ruffels turned pro at age 17 and made his full slate of starts thanks to sponsors exemptions, but that was as close as he got to the big Tour. Ruffels became particularly well-known for the gambling story he told about winning $5,000 off of Phil Mickelson, which earned him a stern rebuke from Lefty.

“You don’t discuss specifics of what you play for,” he said, “and you certainly don’t embellish and create a false amount for your own benefit. So those things right there are — that’s high school stuff, and he’s going to have to stop doing that now that he’s out on the PGA Tour,” Mickelson said afterwards. After stints on PGA Tour Latinoamerica the last two years, Ruffels is inching his way back towards the big Tour.

Among golf’s most heartbreaking moments came at the final hole of the Korn Ferry Tour’s season finale, the WinCo Foods Portland Open at Pumpkin Ridge in Oregon. Vince India was playing in the second-to-last group and sitting T2 when he arrived at the par-5 18th hole. A par would guarantee him a promotion to Korn Ferry Finals, where he’d have a good chance of graduating to the PGA Tour. Instead, a wayward bunker shot and three chips later, India had lost his card altogether with a double-bogey 7. “I just did my best,” he said in this heartbreaking interview.

After making double bogey on the 72nd hole @PortlandOpen to fall short of his first #KornFerryTour Finals berth, Vince India (@VIndia36) met with the media to explain what went wrong.#LiveUnderPar pic.twitter.com/eyVSqDxUj5

Now India, 30, has earned that card back after piecing together a 12-under week at Orange County to earn guaranteed starts by just a single shot — a taste of redemption for the Chicago resident. Here’s hoping this season ends differently.

You can see complete results here.