This piece of advice made everything ‘click’ for Max Homa 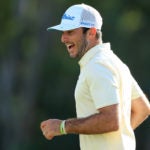 Max Homa had his breakthrough victory at the 2019 Wells Fargo Championship.

It’s no easy task making it to the PGA Tour, and it’s almost harder to get on the Tour and stay there. Max Homa is among the hundreds (thousands?) of pros who have found that out first hand.

Homa recently joined GOLF’s Subpar podcast to discuss a variety of topics, including his long journey to the Tour, which consisted of several years on the Korn Ferry Tour and years of losing his PGA Tour status.

Homa, 29, spent three full seasons on the Korn Ferry Tour: 2014, 2016 and 2018, each time graduating to the PGA Tour. In his 2015 and 2017 seasons on the PGA Tour he was unable to keep his status, but it was a change in his mindset that finally helped him stick, and it came via veteran Charley Hoffman.

“He came over and he goes, ‘Hey, you seem to really succeed when you are the bigger fish in the smaller pond. Why do you keep not feeling like that when you get up [to the PGA Tour]?'” Homa said. “And it really clicked in my head that I need to stop going on the PGA Tour, looking around and being intimidated. Maybe even fake it a little bit, walk out onto a range and think, ‘Alright, I don’t care what you guys are going to do. I’m going to do me, and you can’t play defense on me.'”

Homa said that new mindset — convincing himself that he belonged among the best — mixed with plenty of practice made a big difference. After getting his PGA Tour card for a third time for the 2018-19 season, he started slowly again — missing six straight cuts at one point — but then found consistency with a T10, T37 and T20 in three straight starts in February and March. Then his breakthrough came in May, when he shot 63 in the second round of the Wells Fargo Championship and got a Saturday tee time with Rory McIlroy.

“It was almost a blessing that I got to play with Rory, because it really tested that [mindset],” Homa said. “And I have been picturing that in my head, like, Alright dude, at some point you’re going to have to beat this dude, and now we have this opportunity. I’m ready for it. I’m no longer thinking about big fish/small fish. We are equals in a way at this moment, and it helped a lot.”

Homa turned in a solid round (70) despite losing to McIlroy (68) in their head-to-head matchup, but Homa got his big victory a day later, firing a 67 to win by three and lock in a two-year exemption on the PGA Tour.

“I did think I’d be back [on the PGA Tour],” Homa said. “I did think I was pretty good at this. I knew that every year I seemed to get on the Korn Ferry Tour, even if I wasn’t playing great, I somehow managed to get my way back to the PGA Tour.”

His new mindset turned out to be a good one. You can listen to the full episode with Homa below.