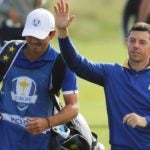 Rory McIlroy pictured during the European team's victory at the 2018 Ryder Cup.

As debate continues about the reality of playing pro golf events without fans in attendance, much focus has been placed on one tournament in particular: the 2020 Ryder Cup. Now the world’s top-ranked golfer, Rory McIlroy, has revealed that he thinks the ever-popular biennial event will be pushed back until 2021.

Two weeks ago at historic Seminole Golf Club in Florida, fans were treated to the first live golf action in months in the form of a skins game for charity, and McIlroy was the star of the show. But fans had to watch from home, as no spectators were allowed on the premises.

That was also the scenario when Tiger Woods, Phil Mickelson, Tom Brady and Peyton Manning faced off in The Match: Champions for Charity on Sunday, although a record number of people tuned in on TV. The same will be true for at least the first four PGA Tour events when the season resumes at Colonial on June 11.

Contesting a regular Tour event without spectators is one thing, but the idea of playing the Ryder Cup in front of empty grandstands is a different animal. Several Tour stars have openly stated that they have little interest in a spectator-less Ryder Cup, including McIlroy and Brooks Koepka.

But in an interview with BBC Sport NI published on Tuesday, McIlroy took his opinion one step further, admitting that he thinks the event will ultimately get postponed until next year.

“My personal hunch is that I don’t see how it is going to happen, so I do not think that it will happen,” McIlroy told the BBC. “… I see it being pushed back until 2021 and, honestly, I think that will be the right call.”

The four-time major champion suggested that the players are the key to the event moving forward in 2020, saying, “If they are not on board with it and don’t want to play then there is no Ryder Cup.”

The primary reason McIlroy thinks his fellow players will line up in favor of postponement is the absence of fans on-site, which he believes will have a negative impact on the event, which often sees large, boisterous crowds cheering on their team (or rooting against the other one).

“I think the majority of players would like to see it pushed back until 2021 so that they can play in front of crowds and have the atmosphere that makes the Ryder Cup so special,” he said.

It’s the same sticking point that Koepka previously identified as his reason for not wanting to play the event in 2020. Koepka told Golf Channel, “I personally don’t want to play [the Ryder Cup] if there’s no fans. I don’t see a point in playing it.” He then got in a minor dust-up with golf fans on Twitter after they criticized his opinion.

Time will tell if McIlroy’s opinion proves true, and Tour pros team up to get the event moved. But as of now, the 2020 Ryder Cup will be played Sept. 25-27, where Rory’s European team will attempt to defend their victory from 2018.