WATCH: Adam Scott misses brutal putt in Wyndham playoff, loses out on over $700,000 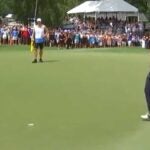 Adam Scott's missed putt in a playoff cost him dearly at the Wyndham Championship.

Adam Scott struck 54 putts inside of 5 feet for the week at the Wyndham Championship. He holed 53 of them.

Unfortunately for the former major champion, the one miss came in the biggest of moments — and it was brutally costly.

After closing with a flurry at Sedgefield Country Club and posting a Sunday 65 — including eight birdies — Scott earned his way into a six-man playoff seeking to win on the PGA Tour for the first time since the 2020 Genesis Invitational.

The 41-year-old’s bid for a 15th Tour title looked to be in excellent shape when he fired his approach shot inside 5 feet on the first playoff hole, but ultimately a balky putter proved to be his downfall.

When all five of the other playoff contestants — Kevin Kisner, Kevin Na, Si Woo Kim, Roger Sloan and Branden Grace — failed to make birdie at the par-4 18th, Scott faced a 4-foot 3-inch putt for the title. But even after studying the putt from every angle, the Australian couldn’t convert.

“Oh!” commentator Jim Nantz cried out when Scott’s ball raced past the cup. “You must be joking.”

The putt was Scott’s only miss inside of 5 feet for the entire tournament.

The miss proved to come at a high price as Kisner took advantage of Scott’s miscue, birdieing the 18th on the second playoff hole just 15 minutes later to nab his fourth victory on Tour.

“I never thought that Adam was going to miss that putt,” Kisner said. “The only thing I could think of was he probably had to wait on that putt longer than any putt he’s ever had to wait on to win with six guys going ahead and putting before him.”

Despite the crunch-time blunder, the final regular-season event was not a total disappointment for him. Coming into the week, Scott sat squarely on the bubble for the FedEx Cup Playoffs at No. 121 in the standings. The T2 finish vaulted him up to 82nd heading into the first playoff event this week at The Northern Trust.