5 surprising players who lost their PGA Tour cards on Sunday 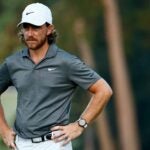 The Wyndham Championship, the last event of the PGA Tour regular season, has long been the last opportunity for pros to play their way into the lucrative FedEx Cup Playoffs and secure PGA Tour cards for the next season. It’s full of both triumph and heartbreak.

The top 125 players in the FedEx Cup standings at the end of the regular season advance to the Playoffs, and those 125 are fully exempt for the next season. Some players who have won tournaments in recent years are still playing off those (longer) exemptions, but for most pros getting into the top 125 is crucial.

Take Chesson Hadley, for example, who entered the week 132nd in the FedEx Cup standings. He needed to vault up seven spots to get into the top 125. A tough task, no doubt, but then he closed with an eight-under 62 on Sunday and grabbed the 125th spot thanks to a late Justin Rose three-putt bogey.

Rose (126th) is among the big names who didn’t qualify for the Playoffs, but he didn’t have to worry about keeping a card. He’s good through 2023-24 due to a WGC win. Rickie Fowler (134th) is safe through 2022-23 via his Players win, Francesco Molinari (142nd) is still good through 2024-25 due to his Open Championship victory, and Jimmy Walker (166th) is good for next season with his PGA victory at Baltusrol.

But those who didn’t get into the top 125 and don’t have other exemptions to fall back on — previous wins, career earnings, etc. — are given conditional status and have more work to do, although they still have an opportunity to regain their full status. Those who finished from 126 to 200 in the FedEx Cup standings are qualified for the Korn Ferry Tour Finals, a three-tournament series that puts that group of 75 with the top 75 from this year’s Korn Ferry Tour regular season points list.

So for some players, like the ones below, there’s still a chance all could be back as regular PGA Tour cardholders in no time. Here are five players who lost their full status, at least for now.

5 players who lost their PGA Tour cards on Sunday

Patrick Rodgers (128th) — Rodgers was exempt through this season but dropped from 123rd entering this week to 128th. He was just one of three players who started the week in but dropped out, joined by Bo Hoag and Ryan Armour. Roger Sloan, Scott Piercy and Hadley were the three to jump into the top 125.

Tommy Fleetwood (137th) — Europe’s Ryder Cup star and the 38th-ranked player in the world missed only four of 18 cuts on the PGA Tour this season, but he had just four top 25s. He still has yet to win on the PGA Tour in 88 starts.

Ryan Moore (144th) — From 2006 to 2019 Moore pocketed at least a million a year in earnings, but he’s had three top 10s in 32 starts over the past two years and was 144th in the final standings. Moore, however, can always use his career money exemption if he needs it. The PGA Tour allows players to use one-time exemptions for the next season if they are in the top 25 and also the top 50 in career earnings (Hunter Mahan and Jim Furyk were among the players who used this last season). At $32,222,361 in total earnings, 35th all time, Moore has that option.

Jason Dufner (154th) — Jason Dufner closed with a 63 on Sunday and tied for 24th at the Wyndham, but it was only his 15th made cut in 29 starts this season and just his second top-25 finish. Dufner won the Memorial in 2017, but that exemption only ran through this season. As for the one-time career earnings exemption Moore could use, Dufner is currently just outside that option. With $27,664,059 in career earnings, he ranks 52nd, and just $313,336 behind the No. 50 spot.