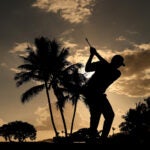 Adam Schenk is the co-leader at Torrey Pines through 36 holes.

If you’re running out the clock on your workweek on Friday by streaming some PGA Tour action at the office, consider sharing a fun fact about Farmers Insurance Open 36-hole co-leader Adam Schenk with your co-workers.

You might flag down Dale from IT, if he walks by your office when Schenk comes on the screen, and ask him a question.

“Hey, Dale!” you’ll say. “Guess what this pro golfer’s parents did for work? First thing that comes to mind.”

“I dunno. Doctor? Lawyer?” asks Dale. You’ll forgive him for being prone to classic golf stereotypes.

“A lot of mowing,” Schenk said after his second round on Thursday. “But we had a seven-acre field of Zoysia in front of our house, so I would just go out and have basically a driving range whenever I wanted to. That was definitely beneficial.”

I should think so. Sure, Schenk didn’t have the manicured greens of a golf course in his yard — “I needed a chipping green, that’s what I need to improve on the most,” he joked — but he had the benefit of space. And grass.

Maybe Schenk dug deep into his golfing origin story during Thursday’s second round, where he hit just 4 of 14 fairways but gamed his way to a bogey-free round that featured 10 birdies including eight (yes, eight!) in a row. Schenk’s demolition of Torrey Pines’ North Course was so complete that he lost track of his score; when he suffered a harsh lip-out at No. 18, he turned to his caddie for reassurance.

“I’d kind of lost track of exactly how many under I was and I didn’t know if that [putt] was possibly to shoot 59 and I didn’t,” Schenk said.

Schenk’s scorecard read 62 in the end, one shot off the course record. As a result he finds himself in impressive company, tied with Justin Thomas and Jon Rahm at 13 under par. He’ll join them in the final group on Friday, mostly thanks to his putter.

“It’s not like I was hitting it to 10 feet every time making the putts, I had a lot of lengthy ones,” Schenk said. Shotlink data isn’t available for the North course, but he ran back through his eight-birdie run as best he could.

Schenk said the last time he’d made eight in a row was when he was 12 or 13 years old in an age-group championship. That was a while ago; he turned 30 on Wednesday.

“Honestly, I lost track of how many I made in a row, I knew it was a couple obviously,” he said.

If you need more Schenk fun facts, there are several that surround his wonderful last name. Perhaps the most attention he’s ever gotten came after he was randomly paired with Ryan Yip and Jhared Hack in the final round of the 2016 News Sentinel Open, a Web.com Tour event at the time. Schenk, Yip and Hack? Dale might groan again at that one.

Schenk said he has leaned into the dubious moniker; plenty of his friends just call him “Shank.” He even hit one on Thursday while warming up for his second round.

“It’s funny, I was hitting some pull cuts on the range this morning. I did shank one, it was my first one in a while, but I cold-shanked a sand wedge, it was like my third shot of the day,” he said. “But I usually hit it off the toe in tournaments, so that’s fortunate.”

One reporter had a final follow-up question. With as well as Schenk had read the greens on Thursday, his family farm didn’t supply the sod for Torrey Pines — right?!