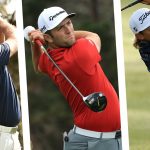 Could one of these three men change their careers this week?

GOLF has partnered with CDW and VMware to explore how the world’s best golfers (like Gary Woodland) develop secure game plans for the Masters. We’re also looking at how data can reveal not only which players are the all-time Masters standouts but also — as you’ll read in the piece below — which 2021 Masters competitors seem destined for a big week…

Fewer than 90 players will tee it up at the Masters this week, and more than a third of them are major champions. They know what it takes to bag the big one, to handle nerves, pressure and Sunday charges from the field. The other 55 or so players do not know — not yet, at least.

Of course, for one Masters contestant that all could change this week at Augusta National.

We mined the numbers — factoring in recent form, Masters records and key strokes-gained stats — to identify a half-dozen players who are primed to win their first major on Alister MacKenzie’s masterpiece. There are no sure things in golf but leaning on data takes some of the guess work out of the prediction game.

No player in the world is backed by the numbers better than Rahm. He’s the 3rd-ranked player in the world and almost never misses cuts. He just hangs around, and his good is often as good as most players’ great. He’s been progressing at the Masters for years, finishing 27th in his first appearance and notching top-10 finishes in the three years since.

When we used stats a year ago to simulate the Masters that didn’t happen in April 2020 , to no one’s surprise Rahm landed the green jacket. His game is great all around the golf course: elite off the tee (3rd in SG: OTT), elite approaching the hole (12th) and excellent around the green. There is one red flag, though: he hasn’t been sharp with his putter (floating around Tour average) to begin 2021.

The numbers also make a strong case for Cantlay. Beyond being one of the best ball-strikers on the planet, Cantlay is remarkably steady. He hits it far and straight, and has no real weaknesses (6th in Strokes Gained this season).

Augusta National requires players to move the ball in both directions, both off the tee and into the greens, in much the same way does Riviera Country Club, in Los Angeles. Many players who have won at Augusta have also won at Riv. Look for Cantlay, who has never finished outside the top 20 at Riviera as a pro, to join that list.

Possessing much of the same reliability as Cantlay, Schauffele is due for a big win. Rewind to 2019 when both Cantlay and Schauffele stormed into the clubhouse at Augusta National with the early lead. It was Schauffele, though, who had the best chance for the come-from-behind win: If he had birdied the par-5 15th, he would have pushed Tiger Woods into a playoff.

Instead, it was another T2 finish for Schauffele. He’s had three 2nd-place finishes already this season and has as many top-10 major finishes (7) as non-top 10 major finishes. Bottom line: He’s due, and he has the game to get it done.

The under-the-radar Canadian has been playing some superb golf of late. After a strong start to his season, Conners contended at the Arnold Palmer Invitational before almost stealing the show at the Players Championship a week later.

Conners finished T10 at the Masters in 2020, buoyed by his impressive ball-striking. The experience is there, and he’s never been in better form. The whiz kids at DataGolf have him listed as the 17th best player in the world, far better than the less-in-the-moment world golf ranking, which lists him at 41st.

This “future of Australian golf” candidate has been living up to the billing of late. The 27-year-old nearly made the jump at the 2020 Masters when he beat or tied everyone in the field not named Dustin Johnson. Smith has quietly done that more than once at the Masters in his brief career. He also finished T5 at the 2018 Masters, confirming how ready he was for the spotlight.

Like many of the others on this list, Smith has never played better golf on the pro circuit than he is now. DataGolf has him gaining 1.81 strokes per round on the field in 2021, a more than 300% boost from his 2020 performance.

While it might seem late in his career for a true “breakthrough,” a Westwood victory at the Masters (at 47 years old) wouldn’t be a huge surprise. The Englishman has been playing some of the best golf of his life over the last 18 months, including a win in Abu Dhabi — and his tactical nature has always been well-suited for Augusta National.

In his last nine appearances at Augusta National, Westwood has five top-10s and could have arguably won in 2016 when Jordan Spieth faltered. Can he win a boat-race Masters to a score of 20 under, like Dustin Johnson did in November? Probably not. But at what seems to be a firmer course in 2021, Westwood could certainly be in the mix if the winning score is around eight or nine under par.