The most dominant Masters performance ever? The answer might surprise you 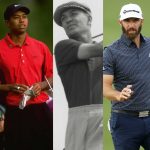 Many Masters winners have demolished the field scoring average, but who is the most dominant champion of them all?

GOLF has partnered with CDW and VMware to explore how the world’s best golfers (like Gary Woodland) develop secure game plans for the Masters, plus how data can reveal not only which players are the all-time Masters standouts but also which 2021 Masters competitors are primed to break out. Below, we’re taking a statistical deep dive into the greatest Masters performances of all time…

Dustin Johnson set the 72-hole Masters scoring record with his 20-under-par 268 winning total last November. He shot a pair of seven-under 65s, plus a 68 on Sunday, to run away with the title.

But was it the best Masters performance ever?

Scoring was lower in the 2020 Masters than any year in the tournament’s history largely due to unusually soft greens that held approach shots like cork boards accepting darts. The cumulative scoring average was 71.753; the only other Masters where the average score was under par were 2019 (71.866) and 1992 (71.907).

That context somewhat diminishes Johnson’s assault on par, which isn’t to say his performance wasn’t outstanding. While bashing drives well over 300 yards, Johnson managed to hit all 14 fairways in the third round and 10 in the fourth. He won by five and finished nine strokes ahead of fifth place.

Still, Johnson didn’t quite beat the field as thoroughly as three other winners: Jack Nicklaus in 1965, Ray Floyd in 1976 and Tiger Woods in 1997. We know this thanks to the metric of strokes gained, which allows us to evaluate players relative to the average performance of the field.

Actually, for the purposes of this study we’re using a slightly modified version of strokes gained.

Because there was no 36-hole cut at the Masters until 1957, if we added up strokes gained against the field in each of the four rounds, the pre-1957 winners would have an edge because in Rounds 3 and 4 they would be compared to a weaker field than post-1957 when the weekend field was limited to the pool of better players making the cut. This is particularly true at the Masters, where the very bottom of the leaderboard has always had some weak links.

So, we’ve compared the winning 72-hole score to the average 72-hole score of those who completed the tournament. This still presents the problem of what to do with the pre-1957 years. The solution is to pretend there was a cut pre-1957, eliminating approximately the same proportion of the field as in the cut years, and counting the 72-hole totals of only the players who made the pretend cut. This is admittedly not a perfect system, but it’s accurate enough for the sake of a fair comparison across the years.

Now, with our methodology explained, it’s time to end the suspense!

The best 72-hole performance was…

The other contender for the throne was Nicklaus in 1965, when he set the then-scoring record with 271 and won by nine. He was 21.12 strokes better than the field average of 292.12.

What’s striking about these performances is the margin by which they are separated from the rest of the Masters champions. The next best winning performance is 19.03, and only one other is better than 16.5. The Floyd, Woods and Nicklaus showings are true outliers that deserve legendary status. The average 72-hole winning score is 12.73 strokes better than the rest of the field. So these three performances would have produced a victory margin eight or nine strokes better than that of an “average” Masters winner.

Sixth on the ranking is Johnson at 16.44. In the last 44 years, that’s the best strokes-gained margin other than Woods’ in 1997. Yes, Johnson took advantage of soft conditions to set the 72-hole record, but his performance still is in the top echelon. And it ranks a little better than Jordan Spieth’s 270 in 2015, when Spieth tied Woods’ then-scoring record. Spieth was 15.89 strokes better than the 72-hole average of the rest of the field, good for eighth place among Masters winners. That’s slightly behind Phil Mickelson, whose 272 in 2010 netted him a 16.30.

Ninth on the list of champions is Byron Nelson at 15.67 with 280 in 1942 — and first on the list of runners-up is Hogan, who tied Nelson at that figure before losing an 18-hole playoff. Another Masters legend, Arnold Palmer, checks in at 15.11 with 276 in 1964, the best performance of his four Augusta victories.

Moving one more down the list we reach Nick Faldo’s best of three victories, which came 25 years ago. While coming from six strokes behind Greg Norman in the final round in 1996, Faldo’s closing 67 also pushed him to a 276 total that was 14.67 better than the field.

David Barrett is the author of the newly released The Story of the Masters: Drama, Joy and Heartbreak at Golf’s Most Iconic Tournament. You may purchase the book here.

PGA Championship playoff format: Here's how the winner at Southern Hills will be determined