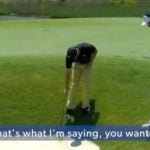 One of the highlights of last week’s RBC Heritage came on Saturday, when boom mics caught a lively conversation between Bubba Watson, Rory McIlroy, caddies and a rules official.

Watson found the greenside bunker on the par-3 17th hole during the third round at Harbor Town on Hilton Head Island, S.C., but when he reached his ball and inspected his lie, he realized a small crab had nestled under his ball.

Watson, McIlroy and their caddies examined the situation before calling for a rules official. Slugger White was soon on the scene.

“There was a camera, and you know, people [would] get mad because I hit an animal,” Watson said, pleading his case. “We got enough issues in our world right now. We don’t need crab issues, you know what I’m saying?”

Luckily for everyone, the crab eventually flipped on its back and scooted away, so Watson played his ball as it was, blasted out and two-putted for bogey.

But what if the crab had stayed under his golf ball? And what if this happens to you? Turns out you might have to get creative.

According to the USGA, a live crab is treated like any other animal (except for dangerous animals, where free relief is allowed under Rule 16.2), which means there’s essentially no rule for it. As Craig Winter, the senior director of Rules of Golf & Amateur Status at the USGA, explains: “The crab fits into the definition of ‘animal.’ If there was a dog near your ball (also an ‘animal’) and you called it so that you could play the shot without distraction, there isn’t a Rule that applies to that. This really isn’t any different than a caddie asking spectators to be quiet or to move when they are in the way — that’s also not covered by Rule.”

So in Watson’s case on Saturday, it was up to him to get the crab to move. He had a couple of options, like trying to encourage it to move — waving a hand near it or sometimes a player’s voice will work, Winter says — and if that doesn’t work, he could have physically removed it.

However, if the player causes the ball to move when doing any of this, the ball must be replaced and the player gets a penalty stroke, per Rule 9.4.

So there you have it. Next time you run into a crab on the golf course, you know what to do. And if you have to move it yourself, be careful! For several reasons.

This power-boosting mobility routine will improve your shoulder turn