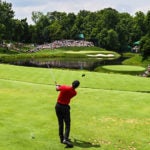 What should fans expect from Tiger Woods' return?

Check in every week for the unfiltered opinions of our writers and editors as they break down the hottest topics in the sport, and join the conversation by tweeting us @golf_com.

1. Tiger Woods is playing in this week’s Memorial Tournament at Muirfield Village, his first start since the Genesis Invitational in February, where he struggled on the weekend, finishing 68th. (In his only other 2020 start, at Torrey Pines, Woods finished T-9.) Woods has won five times at Muirfield but not since 2012. What are realistic expectations for him this week?

Dylan Dethier, senior writer (@dylan_dethier): That’s a particularly safe pick. I’ll push the envelope slightly further — I think he has an up-and-down week capped off by a nice Sunday to crack the top 10. I’m going with T8.

Josh Sens, senior writer (@JoshSens): Tiger wins. Well, probably not. But, like Dylan, I expect a top 10, with winning well within the bounds of “realistic.”

Michael Bamberger, senior writer: No. 83, coming at ya. See you, Sam.

John Wood, PGA Tour caddie for Matt Kuchar (@Johnwould): I think he’s in contention late on Sunday. Knowing Muirfield is being torn up on Monday, Mr. Nicklaus is going to make this course play very difficult with very hard, very fast greens, and nobody has ever handled those two things better than Tiger.

2. Five months is an unusually long layoff for a PGA Tour pro but the time off also no doubt did Woods’s battered body some good. Overall, do you think the respite helps or hurts his chances this week?

Zak: Compared to …? Where Tiger was when Covid struck? He was playing some concerning golf, so yeah, definitely helps his game. But time off doesn’t help you against the guys who have been playing a bunch. If he were to contend, I’d be super impressed and probably retire from doubting him forever.

Dethier: I mean, he won the Zozo Championship after months away from tournament play. With this edition of Woods, it feels like a benefit in terms of his chances of feeling good and playing well. Still, there has to be something he’s missing in terms of contending by sitting out for months on end — right?! Overall, I think it helps, given his sketchy injury history.

Sens: For all of his own talk about needing reps, what he really needs is rest. That’s what we’ve seen out of Tiger 3.0 (or is it 4.0? I’ve lost track). On the right course, when he’s healthy, he’s the man to beat. Or at least one of the small handful of them. Reps? He’s been taking those since he first started to toddle.

Bamberger: Helps, hugely. A rested and ready Tiger? The rest of the players must realize they are playing for second.

Wood: I don’t think he’s overly concerned about his chances this week, but I know this long a layoff will do him a world of good for the condensed major season coming up. That’s why he hasn’t played. Yes, the Memorial is one of the, if not the, best tournaments on tour, but he’s got five of them. Not that he’s using it as a tune-up, but his concerns are in San Francisco, New York and a Thanksgiving-themed green jacket.

3. Collin Morikawa stared down world No. 5 Justin Thomas in a sudden-death playoff at the Workday Charity Open. Morikawa, 23, who started his Tour career with 22 consecutive made-cuts (a mark topped only by Tiger Woods), now has two wins and two runner-up finishes in just 23 career starts. What has been the key to Morikawa’s consistency?

Zak: That he’s the best damn ball-striker we’ve seen reach the Tour since … Tiger? Perhaps that’s a bit much, but you can find stats to back it up. It’s no surprise that he and JT found themselves in playoff. Morikawa isn’t quite as long but much of his game resembles Thomas’. Both will have long, long careers because they just hit a ton of greens.

Dethier: Morikawa hit four or five truly spectacular golf shots from over 200 yards on Sunday. Two near-aces. A kick-in eagle. A driver to 15 feet. He’s an absolute sniper and it was really fun to see him get rewarded, despite almost missing from 18 inches just to get into that playoff.

Sens: You hit it as close as he does over and over, you’re going to be in the mix. A lot. Dead-eye ball-striking aside, he also has a calm about him. At the first event back in Texas, he hit some glitches throughout the week but each time was able to right himself and keep himself in the mix. The putter betrayed him, ultimately. But clearly he’s got something special going on between his ears as well.

Bamberger: Great fundamentals. Cool manner. Seems to have no distractions in his life. He’s about the golf. We’ve seen it before most recently with Justin Thomas and Jordan Spieth. He follows in that tradition.

Wood: Composure and ball striking. He doesn’t seem overwhelmed by any moment out there, and I love that we are seeing the emergence of a possibly great player who does it in an old school fashion. A great swing, fairways and greens. Nothing against the bomb-and-gouge style, but I was starting to wonder if there were any of these guys left!

4. Who ends up with more career wins: Morikawa, Matthew Wolff or Viktor Hovland?

Zak: As the first person to answer I’ll take the obvious choice and choose Morikawa. Though that putter is concerning.

Dethier: These questions are funny because they ALWAYS draw us into becoming prisoners of the moment. Thus far, Hovland and Morikawa have had some similarities in the way they’ve made so many cuts but only contended a handful of times each. They’re each really solid off the tee, elite irons players (yeah, Morikawa is better) and shakier (relative to Tour players) around the greens. Both seem like more sure bets than Wolff, unless things really turn to a long-drive competition (which isn’t out of the question). But I’ll take Hovland after he puts in a TON of work on that chipping.

Sens: Morikawa. The most consistent ball-striker. That gives him the edge.

Bamberger: I wouldn’t know how to even venture a guess. I don’t think the three of them together will come close to 82, though. Half that would be a lot.

Wood: I’d lean toward Morikawa. It just seems he’s right there ALL THE TIME, and getting yourself in position to win is the toughest part.

5. According to a Golf Channel report, the PGA Tour will announce that it will play without fans through the Tour Championship in early September due to the continuing coronavirus pandemic. Do you expect we’ll see galleries any event in 2020?

Zak: [Necessary qualifier: no one knows] Nope! And why should we? I sense the majors being in the fall will drum up solid fields for otherwise listless events. Do we need fans there or can we just continue as we’ve done this far, which has been plenty great? Let the other sports like football figure out that Rubik’s Cube of letting patrons into the grounds.

Dethier: Augusta National may already have developed a vaccine for the sole purpose of welcoming fans through the gates in November. I could imagine them having some fans for the Masters, and maybe some small crowds metered out at the Sanderson Farms, say. I’d guess more than one tournament with fans and fewer than five.

Sens: The Masters, possibly. But nowhere else.

Bamberger: The Masters, with members only and their families.

Wood: I agree. Augusta. I’ve heard they’ve already got the vaccine for Covid-20-23.

6. The Ryder Cup was officially postponed earlier this week due to concerns of not being able to have fans at the event. The matches will now be played next September at Whistling Straits in Wisconsin. Does the extra year in the schedule give either side a competitive edge?

Zak: Not really, though it clears up the schedule for guys like Tommy Fleetwood, Lee Westwood, etc. The only relevant info to me is that Jon Rahm is hitting a bit of a lull right now. When he’s at his best, he’s a multi-point earner alongside Rory (lock). All you need is 14, so those guys firing are important to the Euros. Same for Rose and Fleetwood.

Dethier: I don’t really see an edge for either side. The only thing I see is that this may be a very tough year for the European Tour, which is only sort of connected to how the year might shake out for European Tour pros who play mostly on the PGA Tour (which includes most of the Ryder Cuppers). In short, we’ll have more time to see how the teams shake out, but it’s tough to know which side that benefits. The U.S. feels like they should be big favorites at the moment, but we’ve seen that movie before…

Sens: I can’t see an edge for either. Golf is too fickle. Guys heat up and cool down from one week to the next. The makeup of the teams is not likely to be wildly different next year than it would have been this year. Which means we’re just guessing who would make more clutch shots and putts.

Bamberger: “I heat up. I cool down. When something gets in my way I go ‘round it. Don’t let life get me down. Gonna take life the way that I found it. I got the music in me.” Theme song, Stricker home, as Josh Sens obviously knows. Postponements always favor the home team. Americans, bigly.

Sens: At first, I thought you were singing Abacadabra and I was transported to high school in the early ‘80s. But then I realized you were spinning the vinyl back even farther. Time warp!