3 things to know after Round 2 at the WGC-FedEx St. Jude Invitational 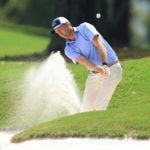 Brendon Todd hits a shot from a bunker on the 16th hole at TPC Southwind on Friday.

Rickie Fowler chipped in for birdie on the 18th hole at TPC Southwind and was now two strokes out of the lead at the halfway point of the World Golf Championships FedEx St. Jude Invitational. He handed the club to his caddie, expressionless. He hasn’t won since February of 2019. He hasn’t won yet. Here are three things you should know after Friday’s second round in Memphis, Tenn.

Brendon Todd birdied five holes, bogeyed none and shot a 5-under 65 to grab a two-stroke advantage over Fowler and a four-stroke lead over Brooks Koepka, Byeong Hun An and Chez Reavie. Todd is leading. He, too, knows he hasn’t won yet.

Just over a month ago, Todd entered the final round of the Travelers Championship with a two-shot lead. He shot a 5-over 75 on Sunday and tied for 11th.

“I think the thing I learned from it is we cannot control the outcome,” Todd said. “Right now, I’m in the lead for two rounds and the second round’s not even finished and there’s a lot of golf left and I’m just happy about the opportunity. But I understand that my job’s just to go play golf and whatever happens, happens.”

Fowler shot a 3-under 67. It follows a 6-under 64. Both follow some struggles. No wins since the Waste Management Phoenix Open in February of 2019. No finish higher than tied for 12th since the Tour’s return – with three missed cuts.

“Yeah, this year hasn’t been my greatest,” Fowler said. “Been working on a lot of stuff. I think this year’s been interesting for a lot of people as far as just how everything’s coming about, from quarantine to playing, not playing. I feel like I’m heading in the right direction. I think that’s been my main goal is go through some changes for the better. Sometimes you’ve got to take that step back to take two steps forward. I feel like we already made the step back, I feel like we’ve made a step forward. I’m looking for that next step.”

Koepka shot a 8-under 62 during the first round, tying his career-low score. He was nine strokes worse during the second round.

He shot 2-under during his front nine. He shot 3-over on his back, double-bogeying the 2nd and bogeying the 5th and 7th, for a 1-over 71.

Koepka was not concerned.

Anong other scores in the no-cut event, Justin Thomas is seven strokes off the lead, Phil Mickelson is eight shots back, and Bryson DeChambeau is 11 strokes behind after shooting a 3-over 73 on Friday.