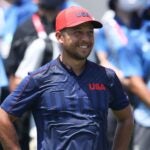 “Anti-doping,” he said on Tuesday in Memphis, thinking back to the Tokyo whirlwind. “They had to make sure I was legit.”

After that, Team Xander made the most of the night. He did a few media hits, where he shared one concern:

“It’s looking a little bit late, eight o’clock’s the closing call for alcohol sales currently in Japan due to Covid,” he said.

Not to worry. Schauffele stopped by the Kasumigaseki Country Club clubhouse, where he shared a toast with committee members. Then he, his caddie Austin Kaiser and his father Stefan shared a van ride and “had a few drinks” on the way. Kaiser shared one quick clip from the trip, with “We are the Champions” blaring in the background:

Olympians were required to stay in their hotels to remain in the bubble while in Japan, which meant that Schauffele was worried he wouldn’t be able to see his grandparents, who live nearby, all week long. But his friend found a solution. They stayed the final night at a Hilton in Narita, the same place they stay for the Zozo Championship.

“We sort of bypassed the ‘don’t leave the bubble’ thing when my buddy got them a hotel room right next to mine, so it was like, ‘Hey, what are you guys doing here?'” Schauffele said.

In a different world, a medal celebration might have included a late night at a glitzy Tokyo club. Instead Schauffele’s version featured in-room dining with his grandparents. For the family-oriented, low-key champ, that was fitting.

Schauffele had said all week he was trying to focus in on the competition like it was any other four-day golf tournament, but there’s no question it held extra meaning. He was living out the Olympic dream of his father, whose own dreams of competing got cut short in a car crash.

“When I get back, I probably won’t have [the medal] for some time because I know my dad really wants to have it,” he said.

But the Tokyo Games were especially meaningful because of his family’s ties to Japan, too. Schauffele’s mother was born in Taiwan (as was bronze medalist C.T. Pan, who Schauffele referred to as “my countryman” on Sunday) but moved to Japan as a child. Her parents still live there. Schauffele shared a special moment with them Sunday evening — one that he said helped him grasp the enormity of what he’d done.

“I think I’m starting to sort of grasp how big it is just in some responses,” he said. “It’s pretty hard to impress someone who’s almost 90 years old and has been on this planet for a long time. They’ve seen a lot of things, and to see my grandpa and my grandma’s reaction when I pull out this gold medal, it really was surprising. It shocked me.”

Schauffele’s grandparents don’t speak much English. He acknowledged he doesn’t actually know how to spell their names — he just knows what he calls them. But the gold medal requires no translation.

“That’s kind of the reaction and something that I would want everyone, kids or my kids’ kids down the generational line to have. It’s a really cool piece to have in the family.”

They met up again in the morning for breakfast, and then Schauffele boarded a charter for Memphis along with a large percentage of the Olympic field.

“Didn’t get much sleep,” he said. “Obviously just a really nice moment that I was able to share there with family and my direct team that I had with me in Japan. I had a little celebration with a bunch of the caddies on the plane. It was one of the guys’ birthdays, so we had plenty of reasons to cheers and drink.”

Now he’s on to this week’s WGC-FedEx St. Jude Invitational in Memphis. It might seem challenging to rally for another tournament this week, but Schauffele said he’s still riding high.

“I’m going to do everything I can this week to sleep enough, to eat right, make sure my mind is okay. But I think playing really well and obviously having a gold medal is just feeding my energy,” he said.

Then it’s back to the West Coast, where he expects his dad will take custody of the medal for the time being.

“Most of us golfers, it’s an individual sport, we’re relatively selfish and we do things for ourselves, but to me it’s sort of more than that and that’s why I think it’s so unique and special for my family,” Schauffele concluded.

“I’ll let him parade around San Diego with it.”