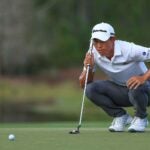 There are only 18 holes remaining at the 2021 WGC-Workday Championship at The Concession Golf Club, which will conclude with the final round on Sunday, Feb. 28. You can find full final-round tee times at the bottom of this post.

Notable pairings for WGC-Workday Championship Round 4

Collin Morikawa was impressive during Friday’s second round, firing the score of the tournament, an eight-under 64, to position himself only one shot behind leader Brooks Koepka. On Saturday, Morikawa kept his foot on the gas, signing for a five-under 67, two shots clear of his nearest competitor.

Morikawa has three PGA Tour wins on his resume, including the 2020 PGA Championship. He’ll play in the final pairing at 1:50 p.m. ET on Sunday alongside Billy Horschel.

Though Morikawa has created the two-stroke cushion for himself, there are a couple of big names lurking. Horschel and Koepka are two shots back, Webb Simpson is three behind, and Rory McIlroy and Patrick Reed are four back. Koepka and Simpson tee off at 1:40 p.m., and McIlroy and Reed start at 1:30 p.m.

Check out the full final round tee times for the 2021 WGC-Workday Championship below.