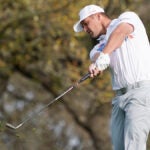 After being sidelined with injuries for six weeks, Bryson DeChambeau is back in action this week.

AUSTIN — On the first day of his long-awaited return to the PGA Tour, Bryson DeChambeau appeared heathy with nary a limp or a grimace, despite having been MIA since early February due to a fractured hamate bone in his left hand and a torn labrum in his left hip.

His game, however, looked less sharp.

In his first-round match against Englishman Richard Bland at the WGC Dell Technologies event, DeChambeau toured plenty of Austin Country Club, launching his opening tee shot into a medical tent, bouncing a shot off a hillside on the 2nd hole and airmailing the green at the 5th. After a loose shot on 13, he found himself in one of the oddest rules situations you’ll ever see, with officials repainting a hazard line around the spot where his ball had settled.

Bland wasn’t much better so when he and DeChambeau both missed birdie tries at 18, neither player could feel too badly about their match’s result: a tie.

“I really feel good about where my game is right now,” DeChambeau told PGA Tour Radio after his round. “I was rusty and very cautious, and it cost me, but there are a lot of things going on behind the scenes that nobody knows about, all in a good way.”

The Texas fans responded positively to the return of DeChambeau, who attended Southern Methodist, in Dallas, the city in which he now lives.

“Bring the power,” one young on-looker shouted as DeChambeau strolled down the first fairway. “We missed you,” hollered another. There were a couple of half-hearted “Brooskie” calls, but they were drowned out by positive encouragement.

DeChambeau had not played a competitive round since withdrawing from the first round of the Saudi Invitational in early February. He missed his title defense at the Arnold Palmer Invitational, at Bay Hill, and also the Players Championship earlier this month.

But he arrived early Monday seemingly ready to go, only to be forced from the course by severe weather. DeChambeau played and practiced Tuesday and said he was looking forward to a full week at Austin CC, followed by starts at the Valero Texas Open next week and the Masters a week later.

Images of DeChambeau’s opening blast Wednesday immediately made their way to Twitter. After soaring into trees lining the right side of the fairway, his ball rolled into a University of Texas Medical tent, resting next to a power cord.

“The first thing he asked is if he hit anybody,” said volunteer Jonathan Geralds. “If that’s the most excitement we have all day, we’ll be ok.”

After taking a drop, DeChambeau chipped short of the green, chipped on and two-putted for bogey.

“Don’t forget to leave a donation,” one fan called out as DeChambeau headed to the green.

“Amen to that,” the golfer responded.

DeChambeau reminded fans of his prodigious power at the par-5 6th hole, where he blistered his tee shot 371 yards down the right center of the fairway. From there — 199 yards out — all he needed was a 9-iron, which he hit to 8 feet. Two putts won him the hole.

DeChambeau was asked what he learned from the round.

“I know I can play golf,” he said. “That’s first and foremost. I don’t have to one-hand it all day. Although I was very cautious. There was a lot of drives out there I felt really bad because it’s not going the places I want it to go just because I’m not confident with how my wrist will go through it. That will get ironed out over time.”

He added that before last Friday he hadn’t touched a club in six weeks, which he said hampered his speed control in his opening match.

On Thursday, DeChambeau plays Lee Westwood. On Friday, he’ll play the fourth member of their group, Talor Gooch. The top player from each group advances to the quarterfinals.

DeChambeau said he’s hopeful his body will be up to the task.

“Obviously because I haven’t walked 18 holes in six weeks, it’s a bit tiring,” he said. “But as of right now it’s holding up well and I pray it holds up the whole way.”