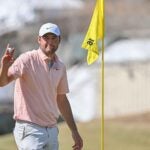 Can anybody stop Scottie Scheffler on Sunday in Austin?

After a week’s worth of golf, we’ve finally reached the final round of play from the 2022 WGC-Dell Technologies Match Play in Austin, Texas. Below, find everything you need to know to tune into the final matches on Sunday.

Can anybody stop Scottie Scheffler? After four days of dominant play, Scheffler enters Sunday’s final round just two victories away from a victory in Austin just a few miles from his alma mater. The former Texas Longhorn, World No. 5 player and budding superstar looks to grab his third victory of 2022 (already!) on Sunday, closing out a stretch of dominance that has vaulted him into Masters betting favorite territory.

Looking to hold off Scheffler on Sunday are Dustin Johnson (in the semifinal match) and, should Scheffler advance, the winner of the match between Corey Conners and Kevin Kisner. Kisner — long regarded as one of the best match play competitors in the sport — would surely relish the chance to capture a victory over either Scheffler or Johnson, two Ryder Cuppers who were selected for the team over him.

Below, find everything you need to know to watch the semifinal and final matches on television, including the TV schedule and streaming information.

How to watch the WGC-Dell Technologies Match Play on TV

Golf Channel and NBC will share TV coverage of the 2022 WGC-Dell Technologies Match Play. Golf Channel will provide early coverage on Sunday with NBC taking over for the heart of the final round. Check out the full TV schedule below.

How to watch the WGC-Dell Technologies Match Play online, streaming

You can also stream the Golf Channel and NBC TV coverage via Peacock on Saturday and Sunday.

How to bet on the WGC-Dell Technologies Match Play