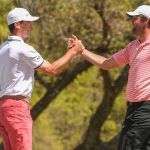 His opponent let him have it.

Five analysts said he shouldn’t have.

Billy Horschel had hit his tee shot into a penalty area. He hit his third stroke to 42 feet, and he missed the par putt. Then, the hole ended, Horschel conceding the birdie putt to Scheffler, his finals foe.

Scheffler would have had to three-putt to split the hole. Instead, he took no putts.

The analysts wanted to see at least one.

“I’ve just witnessed the most baffling decision, I dare say, that I’ve seen in match play,” Golf Channel analyst Brandel Chamblee said on Twitter. “Billy Horschel concedes a 2 putt win of a hole to Scheffler from 34’6” Once player gets outside 32 feet they are more likely to 3 putt than 1 putt. Even more likely on a breezy day.”

“Guys, this is unbelievable,” Gary Koch said during the NBC broadcast. “Billy Horschel’s got this for a 5 at the 2nd, but he’s already conceded the hole. He told Scottie Scheffler to pick it up, and Scottie Scheffler was 34 feet, 6 inches away. You got to make him hit it once, don’t you, Paul?

“You can’t give him that,” Paul Azinger said. “He did it yesterday and we were critical of it, but, uh, well …”

“The wind that’s blowing at the moment is part of why I was surprised too that putt on the 2nd green was conceded because Scheffler was putting right into that wind,” Jim “Bones” Mackay said.

During Horschel’s quarterfinal match against Tommy Fleetwood on Saturday, he had conceded a 3-foot, 10-inch putt on the 10th hole and a 2-foot, 10-inch putt on the 16th. Against Scheffler, Horschel was conceding a putt to a player who was 75th in total putting this season (and 114th last season) and 91st in Strokes Gained: Putting (and 117th last season) — which NBC showed on a graphic.

“It’s curious beyond belief,” Azinger said. “I mean, if Billy Horschel’s strategy is to give 35-footers for two-putt, it’s just a bad policy. I don’t understand it. He might have to rethink that. He did it yesterday, Gary Koch. He gave a 3-foot, 2-inch putt.

“And a 2-foot, 10-inch at critical times and I just don’t like that strategy.”

“Make a guy earn it, right?” Koch said. “Make him earn it if you’re going to lose a hole. And I would have clearly seen Scheffler hit at least one putt there.”

“Well, it could all be part of a cunning plan, which we don’t understand at this point,” David Feherty said.