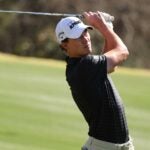 Maverick McNealy made is last-minute spot in the field count on Wednesday.

There were plenty of pitched battles across 32 matches on Day 1 at the 2022 WGC-Dell Technologies Match Play. Harold Varner III traded blows all day with Shane Lowry before winning 2 and 1. Jordan Spieth took and surrendered his lead against Keegan Bradley several times before sneaking away with a 2-up victory.

But the duel between Maverick McNealy and Joaquin Niemann was not one of those matches. Instead, it was one of the most lop-sided in the history of the tournament.

McNealy was the last player admitted into the tournament, for which he received the worst seed in the event, lucky number 64. That earned him an opening-round showdown with 14-seed Joaquin Niemann, the top-ranked player in their group. You wouldn’t have known it based on how the match unfolded, though.

The 26-year-old pro jumped out to a quick 1 up lead when his steady par at Austin Country Club’s 1st hole topped Niemann’s own bogey 5. He made it 2 up at the 3rd and 3 up at the 5th, which is when the thumping truly began. After winning holes 6 and 7 to push his advantage to 5 up, McNealy stepped on the gas and won three of the next four holes.

By the time he sank his short par putt on the 12th hole, the match was over, with McNealy earning an epic 8-and-6 victory. It wasn’t quite as dominant as Tiger Woods’ infamous 9-and-8 trouncing of Stephen Ames back at the 2006 Match Play, but it was close.

Incredibly, McNealy wasn’t even supposed to play this week. But by a turn of fate, Sam Burns went on and won his second-straight Valspar Championship in a playoff last Sunday, and as a result, decided to bow out of the Match Play. That allowed McNealy to take his spot in the field.

It turns out McNealy was already in town. He flew in as an alternate just in case, but also so he could watch his brother Colton’s hockey game just north of the course.

“That was about five minutes before my brother was on the ice and they scored the goal with 15 seconds left to go up 2-1 and win, so it was kind of a fun five minutes there.”

You wouldn’t be blamed for thinking of McNealy as a match-play master, and while he admitted to playing matches regularly at home, he also revealed that he hasn’t played the format in competition in years.

“I play match play every week at home for $5 birdies or Chipotle or whatever it is. There’s lots of good guys to compete with in Vegas at home,” McNealy said. “I play a bunch of match play. But official match play, it’s the first time in five years.”

With a few more wins like he had on Wednesday, he might owe those “good guys” back in Vegas a little more than Chipotle.

McNealy continues his tournament on Thursday with a match against Kevin Na beginning at 3:39 p.m. ET.