2021 Valero Texas Open live coverage: How to watch Round 2 on Friday 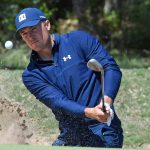 Jordan Spieth pictured during the first round at the 2021 Valero Texas Open.

The 2021 Valero Texas Open got off to an exciting start in the opening round, and now we’re ready for Round 2 on Friday. Here’s what you need to know to watch the second round.

Is this the week Jordan Spieth finally re-enters the winner’s circle? Based on his play in the opening round, it very well could be. Spieth’s game has been coming around lately, leading him to multiple top-5 finishes already this year. Now he’s near the top of the leaderboard again, and just in time for the Masters.

The Texas native shot a 67 on Thursday to temporarily take the early lead at TPC San Antonio, setting himself up for another run at his 12th PGA Tour title, and first since his triumph at the 2017 Open Championship. He’ll start the second round three shots behind leader Camilo Villegas. Spieth tees off Friday at 2:04 p.m. ET.

Rickie Fowler did not fare as well in the opening round. Like Spieth, the popular Tour pro has struggled on the course in recent years, so much so that he needs a win this week to earn a spot in the Masters. But after Day 1, Fowler will need a heroic effort to get the job done. There were no crooked numbers on his scorecard on Thursday, but three-straight bogeys on holes 5-7 did enough damage, leaving him with a four-over 76 at round’s end.

But all he needs is one solid round to make the cut, then anything can happen on the weekend. Fowler will begin his round on Friday at 1:53 p.m. ET alongside Gary Woodland (one under) and Scottie Scheffler (four under).

How to watch Texas Open Round 2 on TV

Golf Channel will air the action for the second round of the 2021 Valero Texas Open with four hours of coverage from 2-6 p.m. ET on Friday.

How to stream Texas Open Round 2 online

You can stream the second round of Golf Channel TV coverage of the Valero Texas Open on golfchannel.com. Fans can also view Featured Group coverage of the opening round all day Friday via PGA Tour Live with a subscription.

How to bet on the Texas Open — risk-free!

Shop some of the best-selling items from our Pro Shop