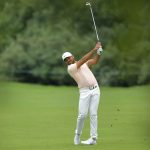 Jason Day is seeking his 13th career Tour victory this week — and his first win since 2018.

The 2021 Travelers Championship in Cromwell, Conn. is already at the halfway point, and continues on Saturday, June 26th. Here are four things you need to know after Friday’s second round at TPC River Highlands.

Jason Day hasn’t won on Tour since he claimed the Wells Fargo Championship in 2018, but after firing a sizzling eight-under 62, he’s in the driver’s seat at the Travelers, vying for his 13th career victory.

Day was one of many big-name players to open the tournament with a round of one-under 69 on Thursday, but on Friday, he let loose, carding eight birdies and zero bogeys to launch himself 44 spots up the leaderboard.

A snapped driver didn’t stop Bubba Watson from posting a second-consecutive 66 on Friday.

On TPC River Highlands’ second hole, Watson’s driver head found the fairway, along with his ball. Despite the mishap, the drive still traveled a whopping 294 yards.

“It’s one of the things where the driver through travel, heat, cold, whatever it is, over time, overuse, my driver head popped off,” Watson said after the round. “It’s the shaft right above the hosel. It’s cracked, broke, whatever you want to call it.”

No matter. Watson still birdied the hole, and had a new driver in the bag one hole later. He’s currently tied for second with first-round co-leader Kramer Hickok, one shot off of Day’s lead in his quest for a fourth Travelers Championship title.

Other big names in the hunt

Justin Rose bounced back from a lackluster round of even par on Thursday to post a seven-under 63 on Friday. He’s now T4 — seven under overall and two shots off the lead.

Ian Poulter, Scottie Scheffler and Patrick Cantlay are six-under overall while Bryson DeChambeau and Patrick Reed are five under.

Notables to miss the cut