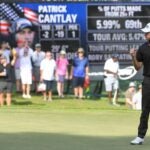 Patrick Cantlay has a two-shot lead heading into the final round of the 2021 Tour Championship.

Only one round remains at the 2021 Tour Championship, with Sunday’s final round primed to be one for the ages. You can check out the complete Round 4 tee times at the bottom of this post.

Patrick Cantlay drained a clutch 23-foot birdie putt on the 18th hole on Saturday to extend his lead to two shots over Jon Rahm.

Cantlay is now 20 under par and in the driver’s seat at East Lake, where the $15 million FedEx Cup bonus hangs in the balance.

Barring a miracle, it looks like there are only three players who have a chance of winning the ultimate prize: Cantlay, Rahm, and Justin Thomas, who fired a 65 on Saturday to get into the mix, five shots behind Cantlay’s lead.

Thomas will play in the penultimate pairing with Kevin Na, who is in solo fourth place at 13 under par overall, seven shots behind Cantlay, at 1:45 p.m. ET. Cantlay and Rahm will tee off in the final pairing at 1:55 p.m. ET.

You can browse the full list of final round tee times for the 2021 Tour Championship below.