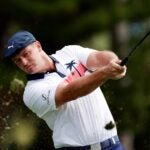 Bryson DeChambeau pictured on Thursday at the 2021 Sentry Tournament of Champions.

The second round of the 2021 Sentry Tournament of Champions begins Friday, January 8, at Kapalua Resort in Hawaii . You can find full second round tee times at the bottom of this post.

Notable pairings for Tournament of Champions Round 2

After a short off-season over the holidays, the Tour’s top players got right back to work on Thursday, and showed little sign of rust, with 36 of the 42 players in the field posting a score under par.

At the top of the leaderboard: Harris English and defending champ Justin Thomas, who both fired rounds of 8-under 65. The two will play the second round together in Friday’s final pairing at 5:40 p.m. ET.

Dustin Johnson was the odds-on favorite to win this week, but he’ll start the second round with a six-shot deficit after an opening 2-under 71. He’ll play alongside Lanto Griffin (-2) at 2:50 p.m. ET on Friday. Check out the complete second round tee times for the 2021 Sentry Tournament of Champions below.

Tournament of Champions Round 2 tee times (All times ET)

How to bet on the Tournament of Champions — risk-free!