‘It’s all fun and games til commas get involved:’ Pro fires back at heckler 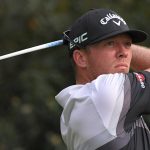 Talor Gooch during the Players Championship in March.

“3 bogeys in a row u are so bad @TalorGooch,” tweeted @VinkolaJokic.

A heckler in Long Island, N.Y., then heard back from Talor Gooch, in Palm Harbor, Fla.

“Did you bet on me?” tweeted @TalorGooch.

For the next six hours, @VinkolaJokic continued to hear from Gooch. Until Gooch no longer heard from @VinkolaJokic.

The epic exchange (shown over 13 photos) — which would feature a mini-golf bet, a flight to JFK and Venmo payments:

Other tweets did. A few folks who had gambled on Gooch took him up on his Venmo offer — and Gooch paid up (shown over nine photos).

One person even gave the money back. It didn’t go unnoticed.

But Gooch stressed that none of this — the mini-golf bet, the flight to JFK and the Venmo payments — was meant to boost his profile in the Player Impact Program, which the PGA Tour started at the start of the year to reward its most popular players.