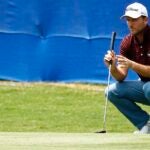 Think about the sort of alerts that pop up on your phone.

Morning alarm? Back to bed, thanks.

Perhaps we should all take a lesson from Russell Henley. A golf lesson, for one thing — Henley shot eight-under 62 on Thursday to take the lead at the Wyndham Championship — but a phone lesson, too. And a lesson in positive self-talk.

That’s because Henley filters the information that enters his day. And every morning, he gets a pop-up reminder on his phone carrying a very simple message:

It’s usually true, too. It was true on Thursday, when Henley gained two-and-a-half shots on the field with the flatstick in his hands. It was true when he made a five-foot putt for eagle at 5 and a 31-foot putt for birdie at 6. It was doubly true at No. 11, where he snaked in a double-breaker for another birdie.

“It broke off the side of the fringe and then the grain at the hole was going the opposite way, so I saw it perfectly and broke both ways and went in. That was pretty cool,” he said. Henley was in a good mood, which makes sense. He’d birdied three of his final four holes, too, to post the day’s low round.

The reminder isn’t brand-new; Henley first alerted himself to his own putting prowess some seven or eight years ago. But then he ditched it for a while, when the putts weren’t going in.

“I turned it off for a few years because it was making me mad because I wasn’t putting well, but I put it back on recently. Maybe I need to keep it there.”

In 2013 and 2015, Henley ranked inside the top 10 on Tour in putting. He hasn’t been able to match that level since; he even fell to No. 162 in 2019 and No. 138 in 2020, consistently losing shots to the field on the greens. But he’s become a sniper with an iron in hand, ranking fourth on Tour in Strokes Gained: Approach. Last year he finished the season third in the same category.

“It’s tough to be really highly ranked in putting, I feel like, when you’re hitting it well, and I feel like I’ve hit it well this year, so that’s my excuse,” he said. Then he caught himself. “I actually have no idea if that’s real or not.”

Henley said he’s made tremendous stride with his full swing the last few years but acknowledged that his putting lagged behind. Recently, though, he’s seen improvement working with Ramon Bescansa, former touring pro and inventor of training aid “The Perfect Putter.” He’s moved up to No. 85 in putting, above average for the first time in years. He’s particularly good from four to eight feet, where he ranks No. 20 on Tour. The stroke looks steady.

Henley hasn’t quite had the season he wanted. He held the lead at the U.S. Open on Sunday before fading to T13. Given his iron play (fourth on Tour) and his scoring average (20th) and his total strokes gained (28th) he feels like he should be higher in the FedEx Cup than his current position of 44th. But he gets it, too.

“That’s golf and it’s just hard and everybody’s good, and I’m just trying to keep my head down and just play well for me.”

I should say that Henley hasn’t quite had the season he wanted yet. He has several more events to make it happen, and this one’s off to a particularly promising start.

“Yeah, my goal at the start of the year is to make the Tour Championship and win and I haven’t done either one of those yet, but going to keep trying my best,” he said.

Perhaps he’ll speak a win into being, just like he did with his hot putter. If he’s taking suggestions for phone alerts, I’ll submit a new one he can use this weekend:

Worth a try, right?