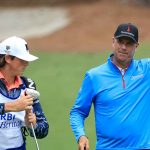 Stewart Cink shot back-to-back rounds of 63 at Harbour Town to lead the tournament by five shots.

The 2021 RBC Heritage at Harbour Town Golf Links is already at the halfway point, and continues on Saturday, April 17. You can find full third round tee times at the bottom of this post.

Notable pairings for RBC Heritage Round 3

PGA Tour veteran Stewart Cink opened up an impressive five-shot lead through 36 holes at Harbour Town after firing his second straight round of 63 (eight under) to reach a cumulative total of 16-under.

The 47-year-old is seeking his eighth career Tour victory this week, and will tee it up alongside Canadian Corey Connors on Saturday, who, at 11-under, is five shots behind Cink’s lead. The duo will begin the third round at 2:10 p.m. ET.

If you disregard Cink’s runaway at the top, the leaderboard is tightly packed. Behind Connors is Emiliano Grillo at 10-under, followed by a four-way tie for fourth, with Cameron Smith, Collin Morikawa, Sungjae Im and Billy Horschel together at nine-under. Grillo will play with Smith at 2:00 p.m. ET, with Morikawa and Im immediately preceding them at 1:50 p.m. ET. Horschel will play at 1:40 p.m. ET alongside Wesley Bryan.

World No. 1 Dustin Johnson was a tournament favorite heading into the week, and after posting rounds of 70-67, he’s currently five-under overall, and T19. Johnson will play with Branden Grace at 11:45 a.m. ET. on Saturday.