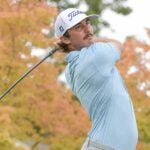 We’ve reached the final round of play at the 2021 Fortinet Championship, here’s everything you need to know to watch the action on Sunday afternoon in Napa, Calif.

Any given Sunday! The 1,078th-best player in the world is also the best player in the field through three rounds at the Fortinet Championship. On Sunday in Napa, Jim Knous, a man who’s never ascended beyond No. 414 in the world, sits only 18 holes from finishing above World No. 1 Jon Rahm and secure his first-career PGA Tour victory. He enters the final round tied with Mav McNealy for first at 14 under.

Knous is a stunner atop the leaderboard, but behind him are a series of big names, including Max Homa, who is T3. Homa (-12) is rocking one of the finest mustaches in the professional game as he looks to climb back from two strokes down and claim victory in the first PGA Tour event of the 2021-2022 season.

Some Ryder Cup notes, only two members of next week’s matchplay event in Sheboygan are competing this week at the Fortinet. The first, Jon Rahm, missed the cut after dealing with a stomach issue in the lead-in to the tournament. The second, Phil Mickelson, enters Sunday tied for 9th place and four strokes back of the lead at 10 under.

How to watch the Fortinet Championship on TV

You can watch the 2021 Fortinet Championship on Golf Channel. Golf Channel will air three hours of coverage for all four rounds of the tournament. Check out Sunday’s TV schedule below.

How to watch the Fortinet Championship online, streaming

You can stream the 2021 Fortinet Championship online in various ways. You can watch the Golf Channel coverage at golfchannel.com/watch or nbcsports.com/live by logging in with your cable credentials. Another way to catch the action is with PGA Tour Live, which also includes featured group coverage, though you’ll need a subscription to access the stream.

How to bet on the Fortinet Championship