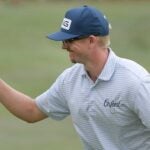 Jim Knous on Saturday after a birdie on 18 on the Silverado Resort and Spa North Course.

Jim Knous was standing over a 17-footer for the first 54-hole lead of his career on the PGA Tour, which put him on track for his first win since, according to him, the 2016 San Juan Open on the mini-tour state open circuit, and that’s when things got even weirder.

Then he made that 17-footer.

But if you’re still confused at the set-up, know that Derek from back home is too.

“My buddy back home, Derek, he said, ‘What are you doing with that? What is that? A moose claw?’ I said yeah,” Knous said.

“I used to just use it for practice strokes and then it just feels good so I just kind of went with it about a month ago and it’s been working great. I just tend to see the breaks pretty well out here. A lot of them have big swings and you can kind of use your imagination and that’s kind of how I like to putt so I was able to roll some nice ones in.”

Which brings us to Sunday. In 2018, after bouncing around the mini-tours, Knous finished in the top 30 on the Korn Ferry Tour, earned his big-tour card for 2019 and made 10 of 18 cuts (including a top 10 at this tournament). But in August 2019, he needed right wrist surgery and rehab. And in March of 2020, Covid hit. The Fortinet now is his second-to-last attempt on his major medical exemption to keep his Tour card.

“Yeah, the pressure’s huge obviously,” Knous said. “The medical extension kind of just weighs on you the whole time while you’re playing. I try to put it to the back of my mind as much as I can. Like I said, I have the mentality I’m going to attack every shot I hit and take it one shot at a time, one step at a time, one foot, left, right, left, right. As crazy as that sounds, sometimes it’s me pacing off left, right, left, right, just to dumb it down and keep it as simple as possible to not think about the overarching outcomes that could be, right?”

Much like the moose claw, Knous will have a lot going on.

“Yeah, nothing to lose really for me,” he said. “I can go out there and play free and hit the shots that I know I can hit, try to go win the tournament. I know it sounds like a lot, but I’m going to play like that because that’s when I play my best golf, when I make full committed swings, 100 percent committed swings. Trying to steer the ball and hit half shots, that’s just not how I play my best. I’m going to go out there and be committed on every shot and every putt and not be tentative at all and, like I said, try to go win the tournament and not lose it.”

Need help on the greens at your home course? Pick up a Green Book from our affiliate company, Golf Logix.