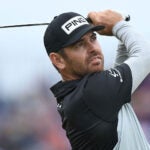 Can Louis Oosthuizen claim his second Open Championship this week?

After weeks of anticipation, the 2021 Open Championship finally got underway on Thursday at England’s Royal St. George’s. So far, it appears that the luck of the draw favored the morning wave, as the majority of the players at the top of the leaderboard finished their rounds early. As the day wore on, the wind picked up and the relatively soft course showed a bit more teeth. Will the same hold true tomorrow? Here are five things you need to know ahead of Friday’s second round.

Louis Oosthuizen already has one Open Championship on his resume: the 2010 Open at St. Andrews, which he won by seven shots. Since then, he’s achieved the grand slam of runner-up finishes in the majors, as well as additional runner-ups in the U.S. Open and PGA Championship this year. It’s safe to say Oosthuizen is a major player, and this round appears to be a continuation of the momentum he’s created over the past few months. Will he keep it going through the next three rounds?

Jordan Spieth is one shot back

Jordan Spieth’s resurgent play has been one of the biggest storylines of the year. And after contending in the Masters (and finishing T3) and posting respectable finishes at the PGA Championship (T30) and U.S. Open (T19), he’s once again knocking on the door after signing for an opening round of 65 — just one shot shy of Oosthuizen’s pace. A win this week would mark his first major victory since he claimed the 2017 Open Championship at Royal Birkdale.

Other big names in contention

Trailing Oosthuizen and Spieth is a bevy of other big names: Webb Simpson is four under, Danny Willet, Justin Rose, Tommy Fleetwood and Collin Morikawa are three under, Viktor Hovland, Paul Casey, Dustin Johnson, Sergio Garcia and Francesco Molinari are two under, and Brooks Koepka, Xander Schauffele and Rickie Fowler are one under. Rory McIlroy is even par. What does it all mean? We’re in for some great entertainment over the next three days.

It’s been a challenging few months for Bryson DeChambeau. Not only does he have a seemingly never-ending feud churning with Brooks Koepka, he’s also in the midst of a recent caddie change. On Thursday, he posted an opening round of one-over 71, and his frustration boiled over in his post-round interview. “The driver sucks,” he said, listing its shortcomings.

When Cobra’s Ben Schomin responded defensively, a chastened DeChambeau posted an apology on social media. Can the embattled U.S. Open champ befriend his driver and rally on Friday? At T74, he’ll need to make a serious move to avoid missing his third Open Championship cut in four appearances.

Thursday’s weather was fairly mellow by Open Championship standards, and Friday looks to be much the same. Players can look forward to partly cloudy skies, and the temperature is expected to top out at around 68 degrees Fahrenheit, with winds gusting between 10 and 20 mph. Game on!

Prepare for your next windy round