2021 BMW Championship live coverage: How to watch Round 4 on Sunday 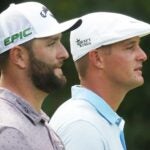 Jon Rahm and Bryson DeChambeau are in the mix heading into the final round of the 2021 BMW Championship.

The scene is set for Round 4 of the 2021 BMW Championship, with what could easily become a truly grand finale on Sunday. Here’s what you need to know to watch the final round on TV or online.

At one point early on Saturday afternoon, it seemed like the final round of this year’s BMW Championship was going to be something of a letdown in the drama department, with Bryson DeChambeau cakewalking to the win and the top spot in the FedEx Cup ranking.

DeChambeau started his third round on a roll, going five under over the first five holes, thanks mostly to back-to-back eagles at the 4 and 5. DeChambeau had reached 23 under at one point on Saturday, but a bogey-double bogey stretch on the back cost him another historic round. By sundown, Bryson had recorded a respectable 67 to tie for the lead with Patrick Cantlay at 21 under.

Those two will face off on Sunday for a trip to the winner’s circle and first place in the standings beginning at 1:55 p.m. ET.

Below you will find everything you need to watch the final round of the BMW Championship on Sunday.

How to watch BMW Championship Round 4 on TV

Golf Channel and NBC will share final round TV coverage of the 2021 BMW Championship. Golf Channel opens the action on Sunday from 12-2 p.m. ET, followed by the NBC broadcast from 2-6 p.m. ET.

How to stream BMW Championship Round 4 online

You can stream the final round Golf Channel TV coverage of the BMW Championship on golfchannel.com, and the NBC broadcast at NBC.com by logging in with your cable credentials. Fans can also view Featured Group coverage of the second round all day Sunday via PGA Tour Live with a subscription.

How to bet on the BMW Championship