This is Patrick Cantlay’s clever formula for navigating Augusta National 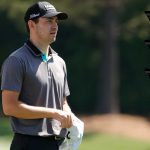 Patrick Cantlay navigates the course like a car on the road

Coming into the 2021 Masters inside the top 10 in the Official World Golf Ranking, and with T9 and T17 finishes in his last two starts, Patrick Cantlay could well slip on the green jacket at the end of the week.

But as good as his game undoubtedly is, Cantlay knows the Masters will be won in the mind as much as it will on the course. Which is good news, because he’s been preparing for it for years. As a junior golfer, Cantlay and his teacher, GOLF Top 100 Teacher Jamie Mulligan, would compare the holes they were playing to similar Augusta National holes — and play them accordingly.

“He was like ‘you had painted the picture from all the times you had been there so well that [when] I got there.. I already knew what it looked like,'” Mulligan said.

And over time, that led to Cantlay developing a simple system that he uses to navigate Augusta. The good news is that it’s simple enough for you to use, too. These are the basics for how it works:

Cantlay thinks about navigating his way around Augusta National the same way he does a car on a road: having to pass a series of red, yellow and green lights. He asks himself

“This place is a series of red, yellow and green lights,” he says. “Thinking about this golf course more and more, that’s how I’ve leaned towards or gone towards.”

Before every approach shot, Cantlay asks himself whether the opportunity to attack the pin is a green, yellow or red light opportunity.

If it’s green, that means attacking the pin is simple and safe: Take dead aim and go.

Red lights are pins that are usually tucked behind some kind of trouble. A back left pin on the 6th hole is a good example:

Yellow lights are somewhere in-between. Trouble may not be front-and-center but is still lurking. So you can attack the pin, but proceed with caution if you do.

Cantlay may be a top-ranked player competing in the Masters, but it’s a simple approach that golfers of all skill levels can adopt for themselves. If the pin is tucked away in a precarious spot, consider it a red light. Forget the pain, and aim for somewhere that will leave your next shot in a good spot. As Cantlay explains, referring back to his 6th hole example, it helps you commit to the task at hand.

“It frees yourself up trying to hit it to that bottom left section and leave yourself 35 feet up the hill or 40 feet up the hill. So that would be a situation where you’re leaving it in the correct spot,” he says. “Maybe you make a 40-footer, but knowing that you’re trying to hit it to 40 feet, because this is what the hole requires for playing it good every time you play, almost frees you up for the 40-footer. You don’t get the 40-footer and think, you know, I didn’t get it up on that top shelf.  You were expecting 40 feet. 40 feet up the hill is exactly where I should be.”