2020 RBC Heritage Live Coverage: How to watch round 4 at Harbour Town 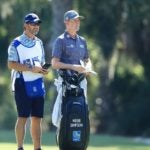 Webb Simpson sits in a four-way tie for the lead heading into the final round at the RBC Heritage Classic.

A four-way tie for the lead only headlines a packed leaderboard heading in the final round of action at the RBC Heritage Classic at Harbour Town Golf Links. Webb Simpson, Abraham Ancer, Tyrrell Hatton and Ryan Palmer are all tied atop the field at 15 under.

The quartette of leaders are far from the only contenders. Last week’s Charles Schwab winner Daniel Berger sits one stroke back, tied for fifth at 14 under, while young guns Joaquin Niemann and Viktor Hovland are two strokes back. Niemann and Hovland — a pair of up-and-coming international stars — are buttressed by Sergio Garcia and Ian Poulter. The pair of European Ryder Cup mainstays also begin Sunday two back at 13 under.

Meanwhile, Dustin Johnson and Brooks Koepka fired three consecutive rounds in the 60s to begin the weekend, but still have work to do to land in close contention. Both are tied for 20th at 12 under.

How to watch RBC Heritage Round 4 on TV

Golf Channel and CBS will broadcast the final round of the RBC Heritage on TV. Golf Channel will air two hours of coverage from 1-3 p.m. ET on Sunday, June 21, with CBS taking over from 3-6 p.m. ET.

How to stream RBC Heritage Round 4 online

Viewers who choose to watch the tournament online can view Featured Group coverage of the final round all day Sunday via PGA Tour Live, though you will need an account to access the stream. For those with a cable TV subscription, the Golf Channel TV broadcast (1-3 p.m. ET) can be streamed live online at golfchannel.com.

The CBS broadcast (3-6 p.m. ET) can be streamed at cbs.com/all-access by logging in with your cable credentials, or you can sign up for a CBS All-Access account here.