Northern Trust live coverage: How to watch the final round Sunday 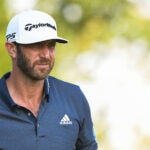 It’s Sunday at the Northern Trust from TPC Boston in Norton, Mass. Through three rounds, we’ve seen a bit of everything, from record-breaking scores to a five-stroke lead. Here’s everything you need to know for the Northern Trust’s final round, including how to watch.

Dustin Johnson has a stranglehold on the lead heading into the final round at the Northern Trust on Sunday. After a whopping 60 on Friday, Johnson launched himself into the lead. In the third round, DJ mostly played keep away, shooting a 7-under 64 to land himself at -22, five strokes higher than second place.

But while Johnson is living under par, Scottie Scheffler has found himself living firmly in the annals of history. The 24-year-old Scheffler shot a 12-under 59 (!!!) on Friday, becoming just the 12th player in PGA Tour history to log a sub-60 round.

Scheffler heads into the final round tied for second place with Harris English at -17. Behind Johnson, Scheffler and English and rounding out the top 5 are Louis Oosthuizen, Harry Higgs, Daniel Berger and Danny Lee.

Below you’ll find everything you need to know to watch Sunday’s final round of the Northern Trust.

How to watch the Northern Trust on TV

Golf Channel will air the first two hours of the action on Sunday at the Northern Trust beginning at 12:30 p.m. ET. At 2:30 p.m. ET, the coverage will switch to CBS, who will air the remainder of the tournament.

How to watch the Northern Trust online

With a cable subscription login, you can stream the first part of the final round from the Northern Trust on golfchannel.com before heading over to cbssports.com at 2:30 p.m. ET to stream the remainder of the tournament.

Fans can also view Featured Group coverage of the final round all day Sunday via PGA Tour Live, though you will need an independent subscription to access.