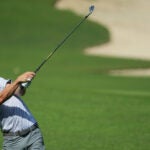 Justin Thomas hits a shot on the 13th hole at El Camaleon Golf Club on Saturday.

Justin Thomas birdied half of his holes. Viktor Hovland, Adam Long and Maverick McNealy  did, too. In all, 338 birdies were made during Saturday’s third round of the Mayakoba Golf Classic.

That might be the total during Sunday’s final round at El Camaleon Golf Club in Playa del Carmen, Mexico.

“All I can do is just try to shoot under par tomorrow and see if it’s enough,” leader Emiliano Grillo said.

“It’s right there,” said Thomas, who’s four shots behind Grillo. “With ball in hand, you can put the ball in the fairway; it’s very easy. It’s not going to go anywhere when it lands on the green, so if you’re hitting your yardages, hitting your numbers, for the most part, you’re not going to have outside 15, 20 feet all day if you’re getting the ball in play. Obviously, if you hit it in the rough or the first cut, you can get some mud balls, and it can get pretty tough, but for the most part, it’s in front of you. You’ve just got to go out and get it.”

“A lot of guys scored today. Hopefully I’m one of those guys tomorrow that takes it low,” said Tony Finau, who’s five strokes behind Grillo. “It’s going to take probably a low- to mid-60s round for me tomorrow. B—s to the wall, try to make birdies, be one of those guys that are going low tomorrow.”

Grillo is at 16 under, and he leads by one over Tom Hoge, and by two over Hovland. They tee off last, at 10 a.m. ET. Long is three shots back, and Thomas and Patrick Rodgers are four shots back, and they tee off second-to-last, at 9:50 a.m.

The fourth-round tee times are below. NBC will broadcast the tournament from 1-4 p.m. ET.

'I told him to be prepared for his life to change:' Tony Romo's advice to Will Zalatoris

Tour Confidential Daily: Who wins the Masters on Sunday?

Why a rain delay at the Masters changed the entire tournament