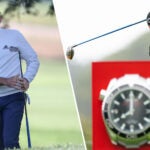 Some of golf's big names won't be a part of this year's FedEx Cup Playoffs.

It’s officially Northern Trust week on the PGA Tour, which means that the FedEx Cup Playoffs have arrived. Typically this is a bittersweet week because it means that while plenty of Tour players have secured their cards for the following year, others have lost theirs and are preparing for relegation to the Korn Ferry Tour.

This year, things are slightly different — because the PGA Tour canceled or rescheduled 13 events from the 2019-20 calendar, they extended the status of exempt members through the 2020-21 season. So the sting of missing out on the playoffs doesn’t quite mean the same thing as usual. Still, finishing outside the top 125 has major implications for status next year as well as for prize money this year. Players like Shane Lowry and Zach Johnson moved inside the bubble at the Wyndham, while Wyndham Clark (no relation) held onto the final spot at No. 125.

Which familiar faces will be missing from this year’s playoffs? Here are the five we’ll be most surprised not to see:

If you have a recent memory of Stenson holding up a winner’s trophy, you’re not making that up — he took down the 2019 Hero World Challenge over a loaded (if limited) field. Unfortunately for Stenson, the Hero doesn’t give out FedEx points. Despite his world ranking (No. 39!) Stenson won’t be making the trip to TPC Boston.

Golf fans who have been tracking Stenson’s whereabouts won’t be terribly surprised that he’s missing the playoffs this year. He’s played just five qualifying events on the PGA Tour and just twice since the restart — a T35 at WGC-Memphis and an MC at the PGA Championship. There’s plenty of life left in Stenson’s game, but his limited playing schedule is divided between the PGA and European Tours, which is a big reason he’s sitting at No. 201 in this year’s FedEx Cup, well outside the cutoff for the Northern Trust.

Because of the way the schedule shook out, Rory McIlroy is still the defending champion at the Players — and Jim Furyk is still the defending runner-up. Unfortunately for Furyk, that doesn’t carry any weight in terms of this year’s FedEx Cup; he’s finishing the year at No. 181, earning just 108 points in 13 starts (No. 125, Wyndham Clark, earned 276).

Furyk is 50 now. He’s a Ryder Cup captain and a potential dominant force on the PGA Tour Champions. But he still feels like the kind of guy we just expect will throw in a couple surprise runs at, say, the Travelers or the RBC Heritage. Maybe next year?

A year ago, Matt Wallace was hovering around the edge of the world Top 25. He finished T3 at the 2019 PGA Championship, ran off a string of top-10s on the European Tour and seemed generally ascendant.

We’ve heard from Wallace recently, too, as he snuck to the edge of contention at the Rocket Mortgage Classic and more notably when he finished T4 at the Memorial. He’s another guy with a schedule split between the U.S. and Europe, but his talent and public perception make it a bit of a surprise to see Wallace at No. 134, on the wrong side of the bubble.

I can’t think of anyone else on the PGA Tour who notched two top-5 finishes in 2020 and didn’t make the playoffs, but Charl Schwartzel did just that when he missed the cut at the Wyndham to fall from No. 125 to 128 in the standings.

The actual act of seeing Schwartzel is also particularly top-of-mind because he cut such a distinct figure at the 3M Open, where he showed up with a cowboy/sun hat that emitted some serious retro vibes.

Schwartzel finished T3 at the 3M, and he finished T5 at the AT&T Pebble Beach Pro-Am this winter. But it’s been more famine than feast the rest of the way, with seven missed cuts in his other 10 PGA Tour starts this season. Here’s hoping for good health and superior sun protection for Schwartzel when the Tour begins anew.

The most surprising name to find below the 125 line is that of Sergio Garcia, the seemingly ageless Spaniard who remains No. 43 in the world but just No. 135 in the FedEx Cup after a T66 at the Wyndham this week.

Garcia’s lackluster season finish can be attributed to a few things. For one, he played just 12 qualifying events. For another, some of his best recent play has come across the pond, including five top-10s and a victory in his European Tour starts since last year’s FedEx Cup Playoffs. Overall, Garcia just hasn’t contended enough to rack up those points. He’s made plenty of weekends, surviving 10 of 12 PGA Tour cuts, but logged just one top-30 finish: a T5 at the RBC Heritage.

One thing is for sure: We’ll see plenty more of Sergio Garcia — as well as the other names on this list — just not in the next few weeks.