Rickie Fowler, Sergio Garcia among notables to miss the cut at PGA Championship 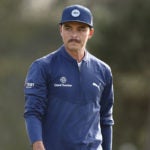 Rickie Fowler missed the cut at the 2020 PGA Championship.

The weekend is officially here and only 79 players will take part at the PGA Championship.

The cutline was set at one over late Friday evening, eliminating most the field, including all 20 PGA club professionals. Tiger Woods himself flirted with the cutline Friday after shooting 72, but his 68 from Thursday proved just enough to help him get through. A late birdie-par-par finish helped his cause. He’ll begin his third round early Saturday.

Rickie Fowler was not so lucky. Fowler made a great run to get back inside the cutline Friday afternoon but a costly whiff on a short putt is what he’s likely thinking about right now. It led to a costly double bogey on the par-4 6th hole. Another bogey on the difficult 8th did him in.

Major-winners Zach Johnson and Martin Kaymer, who both started out strong with 66s on Thursday, struggled significantly Friday evening. Kaymer shot 82 Friday, the second-worst round of the day, while Johnson left his final putt short to miss the cut by one at two over.

Tyrrell Hatton was one of the best players in the world all season thus far, but it didn’t amount to anything for him at Harding Park. Hatton made 11 bogeys en route to finishing three over.

Sergio Garcia’s struggles in majors have continued ever since that fateful Masters victory. Garcia shot 73-73 in San Francisco. He has not finished in the top 20 in a major since the 2017 Masters, missing the cut eight times.

Other notables to miss the cut can be found here: