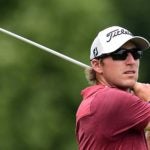 Richy Werenski tees off on the 11th hole at TPC Twin Cities on Saturday.

Michael Thompson, Richy Werenski, Charl Schwartzel, Tony Finau and Max Homa are at the top of the leaderboard after three rounds at TPC Twin Cities. Thompson and Werenski lead the 3M Open by two shots over Schwartzel and Finau, and Homa is three shots back. Together, they are 68-under.

They’ve rarely been at the top of any PGA Tour leaderboard after four rounds.

They have five victories among them. They have just one since 2017. Werenski has none.

Each has had similar scores this week. Each will have similar thoughts on Sunday.

The fourth-round tee times are below. The Golf Channel will begin coverage of the tournament from 1-3 p.m. ET, and CBSsports.com will continue coverage from 3-6 p.m. ET.