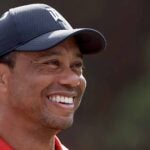 Golfers are a diverse breed, but we all share a trait: we’re optimists at heart, always clinging to the promise of something better just around the bend — a smoother swing; a purer strike; a lower score; a hole-in-one!

With 2021 officially in the books, we turn our hopeful gaze to the 12 months ahead. Whether you’ll be playing or watching, here are 11 reasons why we believe golf in 2022 will be even better than it was in 2021.

Tiger on the Prowl. Again

As sweet as it was to watch him in a heart-warming hit-and-giggle, sentimentality only goes so far. What we’re looking for this year is the raw excitement of Woods returning to elite competition. If that strikes you as an unrealistic prospect, you’re forgetting all the ways he has surprised us before.

Another Open at the Old Course

No big deal. Just an epic milestone for the game’s oldest major, staged at the granddaddy of all venues. Postponed for a year by the pandemic, this will be the 150th playing of the Open Championship, and the 30th turn as host for the Old Course at St. Andrews. Past winners here include Bobby Jones, Sam Snead, Jack Nicklaus, Seve Ballesteros, Nick Faldo and Tiger Woods. Suffice to say, we’ll be tuning in.

Notice we didn’t say Brooks vs. Bryson. Here’s to moving past their sophomoric “feud” and letting each man get back to doing what he does best. With any luck, the two will cross paths once again — not in another Match but in a meeting that really matters, like the final pairing of a major.

Whoa, Nelly! And Other Sources of Excitement in the Women’s Game

Fresh off a season marked by a gold medal, a major and a rise to the top spot in the Rolex rankings, Nelly Korda shows no signs of slowing. Throw in the Kos (Lydia and Jin Young; with no relation aside from their talent), plus the likes of Danielle Kang, Lexi Thompson and others, all vying for pumped up purses under new LPGA commissioner Mollie Marcoux Samaan, and the LPGA has rarely been in a stronger place.

Another year brings another opportunity to marvel at the talents of Morikawa, who, at 24, has five Tour wins, including two major titles in just nine tries, an early career run unmatched by any player in the post-Tiger age.

“Invest in land. They’re not making it anymore,” Mark Twain advised, a truism that helps explain why course renovations are more common than new constructions. Still, the year ahead has a lot in store, highlighted by a stunner-in-the-making at Cabot St. Lucia and a faithful reproduction of The Lido, a long-lost CB Macdonald masterpiece that is currently being cloned in the sand barrens of Wisconsin.

Golf is a global game but let’s face it: 2021 was not the best for seeing what the world has to offer. Here’s hoping for a year in which we get those getaways back on the books.

Female golfers under 18 represent the fastest growing segment of the game. In 2022, the future will continue to unfold in present tense.

A Showcase of Great Design

In addition to the Old Course for the Open, the calendar will give us two looks at Augusta in the spring; a peek at Southern Hills, in Tulsa, for the PGA Championship; and a trip to The Country Club, in Brookline, for the U.S. Open. Add to that the U.S. Amateur at Ridgewood in New Jersey, and the U.S. Women’s Amateur at Chambers Bay (to say nothing of the usual stops at Pebble and Riviera) and the year should serve as catnip for architecture nerds.

Considering that he’s already won four times in six tries, it almost seems unfair to set Phil Mickelson loose once more on the senior circuit. But so be it. His Champions Tour appearances are good entertainment. And a nice source of income for the man as he waits for the social security checks to start showing up.

A Flood of Live-Stream Coverage

So apparently $6.99 doesn’t buy a lot in the pro shop. But in 2022, it can be spent in other ways. That’s the price per month for viewers of vastly expanded tournament coverage arising from a new live streaming deal between the PGA Tour and ESPN+. Under the arrangement, the total number of coverage hours will more than triple, with live streams of featured groups and marquee holes to complement the main broadcast feed.