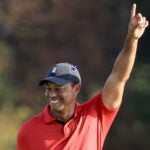 Tiger Woods, during Sunday's final round of the PNC Championship, his first competitive event since his crash in late February.

Check in every week for the unfiltered opinions of our writers and editors as they break down the hottest topics in the sport, and join the conversation by tweeting us @golf_com. This week, we discuss Tiger Woods’ PNC return, new PGA Tour viewing options and our dream lesson.

1. Where to begin?! Tiger Woods, playing alongside his 12-year-old son, Charlie, made his first start since his car crash, at the PNC Championship, in Orlando — and the results were spectacular. On Sunday, in the second and final round of the 36-hole scramble, Tiger and Charlie made 11 consecutive birdies to charge up the leaderboard and finish second, at 25-under, two back of John Daly and his son, John II.  Your impressions of what you witnessed, please.

Zephyr Melton, assistant editor (@zephyrmelton): That was fun! After the accident back in February, it seemed unlikely Tiger would ever play again, so seeing him hitting quality shots with the cameras on was neat to see.

Michael Bamberger, senior writer: It’s almost super-human. You take the two best golfers at your club and put them in this format. They’re going to shoot maybe 10-under — 25-under is incredible, scramble better-ball and all. It speaks to Charlie’s improvement, and his father’s will.

Nick Piastowski, senior editor (@nickpia): Thank you, science. We may never completely know what shape the elder Woods was in after his crash, but a limp and a slightly revamped swing some 10 months afterward gives you some hint. And for him to be hitting 300-yard drives and sticking irons to within inches is … I don’t know? Unbelievable. Unreal. Unnatural. Pick your ‘un.’ Also, on the young Charlie front, maybe the more impressive thing than his swing is his coolness around a crowd. I sometimes get swing jitters with three playing partners — and there’s Charlie hitting fairways in front of thousands.

Dylan Dethier, senior writer (@dylan_dethier): I was standing on the back of the 17th tee when Charlie Woods pulled 5-iron, cut it off the left water and watched it stop some 4 feet from the hole. I found myself laughing out loud. The entire scene was so feel-good, so preposterous, so much better than whatever we could have predicted 10 months ago, three months ago, last week. I won’t soon forget that feeling.

James Colgan, assistant editor (@jamescolgan26): My first (and biggest) impression is that it’s amazing how important we make 72 holes of stroke play sound when one of the best events of the year is a 36-hole, best ball scramble. Maybe that whole week-in, week-out grind would be better served if we occasionally catered to different styles of play.

2. Tiger made it clear that he’s still nowhere near being able to walk 18 holes and did not articulate a timeline for his PGA Tour return. But what did these two rounds tell you about both his physical condition and the state of his game?

Melton: Look, Tiger hit some great shots and looked far further along than many of us thought he’d be at this stage, but trying to dissect the state of his game based on a 36-hole, two-man scramble is a fool’s errand. There’s a wide gap in the quality of golf needed to compete on Tour as opposed to winning a hit-and-giggle. I’m still tempering my expectations.

Bamberger: Right now, Tiger could not talk nine holes, let alone 18 holes a day for four or five days. The shape of his swing is gorgeous, But the speed, the zip, the audacious confidence to attempt this and that — the things that made him Tiger Woods — are not there. That doesn’t mean they won’t come back.

Piastowski: I can’t say much more than above, that yes, he’s nowhere near the condition to walk an entire round, let alone four, and yes, this was just a swing to get him through an event successfully at this point in time. But as I watched, I couldn’t help but wonder what focusing maybe only on tempo and short game and course management would do for this “new” Tiger. (Tiger 3.0?) That’s not to say that he hasn’t done all that before. But if this were solely his game going forward, where his mind, and not his power, were what he leaned on, what does that look like? It was already a strength. Maybe even his biggest one. What would happen if it got stronger?

Colgan: He’s not close, but goodness, I expected him to look much further. The leg (and how it’ll impact his ability to swing a driver) is still a rather significant question mark, sure. But it’s clear the rest of his game hasn’t missed a beat.

3. From what you saw or heard from Tiger over the past three days, what most surprised you?

Melton: I noted it above, but I think we were all surprised at how far along in his recovery he was. I’m glad to see he can still enjoy the game.

Bamberger: His life changed permanently as a result of a car crash that is essentially inexplicable. Yet he presents himself pretty much as he always has, even as he says he won’t be playing the Tour full time ever again. Well, when did he ever play the Tour on a full-time basis? He took Nicklaus’ limited schedule formula to an even more limited place.

Piastowski: I’m not sure if I’m answering the question correctly here, but I want to get it out, so here goes. (This wouldn’t be a good way to answer during a test, but we’re a friendly bunch here at TC.) Maybe the most memorable part of the three days was Friday after the pro-am, when, on the range, Tiger dropped his bag against a cart, used it as a back pillow and relaxed on the ground as Charlie hit balls. We don’t get many looks at the Woods camp outside of Tour player Tiger, but when we do, they make an impression. And dad watching son hit balls while leaned up against a cart was impressionable.

Dethier: I was surprised that he hit 174 mph ball speed on Sunday, and even more surprised given that number came on a drive he described as “weak and spinny” to his manager, Rob McNamara, as they drove from the 13th tee. That’s above-average speed, even when “average” is his freakish group of peers on the PGA Tour.

Colgan: Agreed on that ball-speed number, Dylan — I thought he’d be somewhere in the 160s. I was also struck by Tiger’s intensity. He was pretty dialed for someone I expected to be pretty sentimental. I know that’s kinda his thing, but he also described this event as a ‘hit-and-giggle’ less than 20 days ago.

4. Tiger didn’t do it alone at the PNC — his co-star, Charlie, also dazzled with a steady diet of smashed drives and holed putts. Which part of Charlie’s game most impressed you?

Melton: It’s super impressive to see how well Charlie can perform with the cameras on him for every shot. I can’t imagine trying to pull off some of the shots he executed with a camera in my face.

Bamberger: His sense of fun. His flowing follow-through. His rhythm and athleticism. The ease with which he catches the ball when it is tossed to him.

Piastowski: I mentioned his coolness above, but I’ll toss in the razzing of Justin Thomas. Seems like Charlie can’t stand to lose. Like his pop.

Dethier: His distance control. Those wedges land pin-high. I’m not sure if that was conveyed via lessons, osmosis or DNA, but it’s something he has in common with his dad. Also, he’s got that tunnel vision.

Colgan: His precociousness. He wasn’t scared of the moment, and I’m pretty sure I was scared of the moment for him. He’s just a kid, and who knows what his future in golf holds, but kudos to Charlie (and the folks raising him) for encouraging that spark.

5. No one will mistake the PNC Championship for the PGA Championship, but given what Woods has been through over the past 10 months, where does this performance rank among his all-time indelible moments?

Melton: I think this was an indelible moment for Tiger Woods the person and father more so than Tiger Woods the golfer. Being able to tee it up again with Charlie is what matters — the golf is trivial in the grand scheme.

Bamberger: Well, it’s a one-off, or a two-off, with his appearance at the same event last year. He said he was playing as a “Dad.” I think that’s exactly what he did. Tiger is capable of being very, very truthful. When he says he’s nowhere close to playing Tour-level golf — beyond the walking, the actual playing — I absolutely believe him.

Piastowski: It’s up there, right? In no way am I saying that winning the PNC is like winning a major. In no way. But to come back, do something your son wanted, play well and be a dad? Those wins are certainly noteworthy in the whole that is Tiger Woods.

Dethier: I’ll yield part of my time to the man himself, who was asked a similar question post-round. “Well, it would have a special meaning in my heart for sure, there’s no doubt about it — and it still does.” In other words, he refused to answer the question, and I’ll do the same. It’s in a different category, but I’ll remember it damn well.

Colgan: I don’t think this weekend will wind up anywhere near the shortlist of Tiger’s great golf accomplishments. The event doesn’t rise to that standard, and neither does a runner-up finish. But it’s certainly on his shortlist, and that’s worth something.

6. Beyond the Tiger and Charlie Show, the PNC was full of many other fun storylines, from Lee Trevino doing his thing to Nelly Korda teaming up with her tennis pro father Petr to John Daly channeling Santa Claus at a Friday night dinner. Which non-Woods team or moment did you most enjoy watching?

Melton: Can I choose the moment when Nelly gushed like a schoolgirl and asked Tiger for a photo? Because that warmed the heart.

Piastowski: Dang, Zephyr and Michael picked two good ones. I’ll toss in that PNC feeds the kids chicken tenders, fries and PB&J for meals. (Which Justin Thomas not only shared on Instagram, but also enjoyed himself.) No wonder the kids were playing so well! And JT!

Dethier: I’d never watched Nelly Korda play actual tournament golf. I arrived at No. 6 today as she was standing over a 160-yard approach. She hit it to 2 feet. Touche. For extra credit, I’ll add this: I liked leaving the media center and seeing the grinders doing their thing: Vijay Singh on the range, Padraig Harrington on the putting green. Natural habitat.

Colgan: John Daly II’s performance was, in a word, stirring. That kid has some SERIOUS game. Long way to go, but it’d be damn fun watching him compete with the big boys some day.