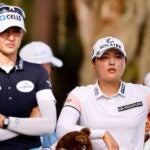 Nelly Korda and Jin Young Ko put on a show in 2021 combining for 10 wins as the duo became the undisputed top dogs in women's golf.

Is there a rivalry brewing at the top of women’s golf? It might be premature to put a rigid label on it, but if 2021 showed anything, it’s that there are indisputably two top dogs on the LPGA circuit: Nelly Korda and Jin Young Ko.

The duo combined for 10 wins during the calendar year, and their race for Player of the Year came down to the final day. While Ko got the better of Korda in that department, it was Korda who had a more decorated trophy case at year’s end with a major title and a gold medal.

So, who had the better year? It depends on who you ask, but the two established themselves as 1A and 1B in women’s golf this year, and the sport is better for it.

Check out below for the tale of the tape.

The summer of 2021 was the Summer of Nelly Korda. After making the change to left-hand low putting after a missed cut at the U.S. Women’s Open, Korda went on a tear for the remainder of the summer, winning three times — including her maiden major victory and an Olympic gold medal — and ascending to world No. 1 for the first time. Her hot streak made her the face of women’s golf and elevated her to superstar status in the U.S.

If the summer belonged to Nelly Korda, the fall was owned by Jin Young Ko. The first half of the year was rather pedestrian for Ko’s standards, but the back half of 2021 saw her return to dominant form. The 26-year-old won five times from July to November, briefly overtaking Korda for world No. 1, and capped her dominant run with a win at the CME Group Tour Championship. The win was enough to push her point total ahead of Korda for the season as she claimed LPGA Player of the Year honors for the second time in a row.