Why golf movies are so hard to get right, according to a Rotten Tomatoes expert 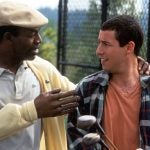 Golf has been the subject of a great many movies, so it’s got that going for it. Too bad many of those movies have been less than great. How to separate the clunkers from the gems? Rotten Tomatoes, the review aggregation website for film and television, can be a useful filter.

So can Mark Ellis, comedian, actor and co-host of the podcast Rotten Tomatoes is Wrong.

Ellis took up golf as a kid, which is also when he started watching movies. Lots of movies. If it’s been on screen, odds are Ellis has seen it, thought about it and opined about it, either on his podcast, or from a barstool.

In deference to his deep cinematic knowledge, GOLF.com asked Ellis for his take on the genre of golf movies, along with his view of its highs and lows.

(Click here for Ellis’ personal ranking of the 6 best golf movies of all time.)

GOLF.com: Tell us, why are most golf movies so lackluster?

Ellis: I wouldn’t go that far. But I do think that golf is hard to dramatize on the big screen because it’s already so cinematic. The camera shots are so beautiful, and nowadays, they get so close up. You see the players and their expressions, the sweat on their brows. You cut to the gallery, with the parents watching, and then to the scoreboard, then back to the player. Think about Jack Nicklaus winning the Masters in ’86. You don’t need a movie because it already is one. Or Tiger Woods and Bob May battling at the PGA. It’s like “Rocky.” The underdog pushes the favorite to the brink. You can’t write a better script than that.

GOLF.com: Another thing that seems tricky is that it’s hard to replicate a great golf swing. We’re asked to believe that some guy in the movie is, say, Harry Varden, when his swing looks like the action of a 10 handicap. Would you agree that’s a problem for golf movies?

Ellis: Honestly, that can be a challenge in any sports movie. But I agree that it’s tough. That’s why I’d like to see a golf movie with Tom Cruise or Daniel Day Lewis. One of those method guys who dives into the character with such commitment. Let’s see what kind of swing they can learn.

GOLF.com: Is there anything the best golf movies have in common?

Ellis: What’s true of golf movies is true of sports movies in general. The best ones use the sport to tell a bigger story about life. They’re usually about an underdog or an outlier who is easy to root for. In golf, the two tentpoles are “Caddyshack” and “Tin Cup.” With Roy McAvoy, you’ve got a guy with a lot of potential, but then life got the better of him, along with a great villain (Don Johnson’s David Simms) who represents what a lot of people think of as the typical elitist golfer. In “Caddyshack,” the same dynamic is at work. You’ve got four characters, three of whom are completely out of place: Rodney Dangerfield, Bill Murray and Chevy Chase. And then Judge Smails.

GOLF.com: Of those four, who in your opinion is the best character?

GOLF.com: What about the best scene in a golf movie?

Ellis: The Happy Gilmore-Bob Barker brawl is right up there. But I’m going to go with “Caddyshack” again. The scene where Al Czervik first shows up and he’s going through the pro shop at Bushwood, making fun of absolutely everything.

GOLF.com: What about the worst golf movie?

Ellis: “Caddyshack 2” and it’s not even close. Never mind the worst golf movie. It might be the worst movie of all time. It’s an uppercut to anyone who likes golf or comedy. It makes me like a legend like Jackie Mason a bit less. And Dan Ackroyd — he’s a comedic genius. But in “Caddyshack 2” he is doing a version of Bill Murray’s greenskeeper and you just feel bad for him. It has a four percent rating on Rotten Tomatoes. I have no idea how it got that four percent rating. It should be zero.

GOLF.com: Any golf movie that you think still needs to be made?

Ellis: I’m waiting for a movie that captures the spirit, drama and competitiveness of mini golf.

Click here for Ellis’ personal ranking of the 6 best golf movies of all time.