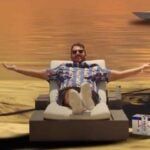 Brooks Koeka got the smack-talk flowing ahead of his match with frenemy Bryson DeChambeau.

Welcome to the first-ever Rogers Report! Each week GOLF’s social media editor, Claire Rogers, will provide a rundown of all things social in the world of golf, and why it all matters to you. Let’s get to it!

With no November Masters to look forward to this year, I was not expecting the world of golf to be as busy as it was this past week. Collin Morikawa’s win was great and Jin Young Ko went on an unreal greens-in-regulations streak, but as far as social goes, I was preparing for a dry couple of days. Thankfully, I could not have been more wrong.

Without further ado, here are six things that caught my eye on social media this week.

Annie and Jordan Spieth welcomed their first child last week, and in typical Spieth-on-social fashion, we didn’t see too much. Jordan is usually pretty quiet on the socials. He’ll share a photo or two after big events, an AT&T commercial here and there or sometimes post about his beloved alma mater. But it rarely feels personal. This is different! Some things just call for a good old-fashioned social media share. And I (someone without children) would argue that having a baby is one of them. Also, Sammy Spieth has a killer grip and I look forward to seeing him win the 2050 Masters.

While I get where Brooks was going with that video, it still missed the mark. It should have been Bryson’s face that he zoomed into, right? Because now Brooks is just saying that he owns space in his own head, which we already knew. Phil, of course, jumped in once things began to heat up. It’s all a friendly reminder that The Match is this Friday, so all this seemingly forced back-and-forth will (hopefully) be over soon.

The undisputed king of Twitter celebrated a birthday on Friday, and although he didn’t tweet much on the day of (he was hopefully out celebrating with friends), this post did make me chuckle.

“Gold medalist” this, “gold medalist” that! For just one minute, I’d like to redirect your attention to the new hairdo Xander rocked at the Wishbone Brawl Charity Tournament at Goat Hill Park this weekend. Enjoy Freddie’s swing for all its natural beauty on first watch, but then take note of Xander Schauffele the second time. Maybe it’s the hat tan. Maybe it’s an odd haircut. It’s likely a mixture of the two. I didn’t like it at first. But it’s the offseason and it’s time for these guys to enjoy themselves a bit. And you can’t be preoccupied with your hair if you buzz it all off.

Rory said he was feeling good entering the final round of the DP World Championship. He said he was back to playing like he should. We all know that is a fleeting feeling, even for the world’s best. Well, Rory fired a 74 on Sunday to finish T6, and he was not happy. Those Nike shirts tend to get a lot of press during major weeks for their bright colors and bold patterns, but this new look was truly something else. “Hulk” McIlroy seemed to take his frustration out on his apparel, which made for a humbling post-round picture. We thought this would be the social media highlight of the week until…

He’s back, folks. The earth stood still at 10:51 a.m. ET on Sunday when Tiger Woods posted what has become the Driving Range Shot Heard ‘round the World. Fans cried, time stopped and other PIP-competitors threw in their towels. Two hundred and seventy-one days after his accident, a three-second video of Eldrick Tont was enough to bring all of Golf Twitter together.

The pros celebrated, too.

Justin Thomas got involved Sunday with some appreciation for both Rory’s shirt and Tiger’s swing video, and I’d have to agree with his take. Rory’s shirt would most definitely have been the most noteworthy social story of the week if Tiger had not swooped in at the last minute. But these guys are used to losing to Tiger, so it’s nothing new.

Big shots: Abraham Ancer and Mark Wahlberg teamed up in the tequila business — and are having a blast