The Match has been a lightning rod of controversy, there’s no doubt about it. The $9 million winner-take-all event between Tiger Woods and Phil Mickelson may have been the most hot-button topic at the Thanksgiving table this year. From who was going to win, to who was going to watch, nowhere did the controversy play out more publicly than on social media.

Leading up to The Match, it was all about who was watching and who wasn’t.

Justin Thomas and Rory McIlroy came out against watching The Match on pay-per-view. 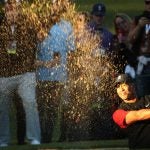 During The Match, social media played an even more important role, making the event available to a wider audience through live updates, news that the Bleacher Report live stream was free and cross-promotion (planned or not) with athletes and celebrities across the spectrum.

Ernie Johnson kept calling out funny tweets on TV to keep the fans on social media engaged and used the hot takes of other professional athletes and celebrities watching to bring some life to the broadcast when things got slow. 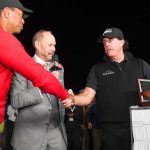 Astros ace Justin Verlander even got in on the fun, challenging commentator Charles Barkley to a six-figure bet that Barkley couldn’t make a double bogey on the first hole at Shadow Creek.

Barkley saying it’s not good golf. 😂😂 I wanna see Tiger and Phil throw down a challenge bet at him. 100k for double bogey or better on #1. C’mon Charles, I know you got your sticks with you. #TheMatch

Chris Paul replied to Verlander’s tweet, saying he wanted in on the action too – for charity.

New York Yankee outfielder Aaron Hicks and NFL star JJ Watt also got in on #TheMatch on Twitter. Hicks tweeted about Phil’s new saying: “sidesauce,” while Watt poked fun at the sheer amount of money Tiger and Phil were putting down on the side challenges.

My buddies to me: “20 bucks says you put it in the water” #TheMatch

Of course, plenty of PGA and LPGA Tour stars were watching, even those that originally said they wouldn’t watch (looking at you, Justin Thomas).

JT even went live on Instagram to ask Rickie Fowler, Jordan Speith and his caddie Michael Greller what they thought of The Match. This group watched together at Spieth’s house ahead of his wedding this weekend.

JT, Rickie and Jordan doing their own live commentary on #TheMatch pic.twitter.com/1uKKjw73Ea

Can we get Temper-Pedic to sponsor #TheMatch?? Bit of a pillow fight going right now haha I won’t these boys to play some golffff #letsgooo

Alison Lee and Michele Wie posted photos with Lefty from the VIP after party to their Instagram accounts, adding more celebrity voices the social media frenzy created around The Match.

Whether you loved The Match or hated it, golf fans can agree that it was pretty cool to see a golf event in November get this much coverage and love from across the sporting world. The reactions on social media from the famous and the fans demonstrate that this head-to-head style event could be beneficial to growing the game of golf in the years to come.