From Tiger’s swing to Phil’s tipsy tweets: The most viral golf moments of 2021 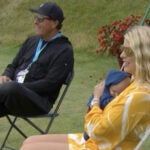 Phil Mickelson and Kelley Cahill Rahm at the U.S. Open

We all know that Tiger moves the needle in the world of golf, but there were plenty of other moments in 2021 that sent us all into a frenzy. I’m here to remind you of the stories you forgot about and the stories that the pros probably wish they could forget about. Without further ado, here’s the funny, the heartwarming, the good and the bad viral moments of 2021.

The year in golf started off on an interesting note. Was mercury in retrograde? Are golfers just strange sometimes? Tom Watson somehow came up with a new way to wear headphones, and thus the first Golf Meme of 2021 was born.

The golf world stood still on February 23 when Woods was involved in a serious car crash in Los Angeles. There was an outpouring of love and support from across the globe, and many pros chose to wear Sunday red in honor of Woods the following Sunday.

Love him or hate him, Bryson DeChambeau’s drives are fun to watch. At Bay Hill, DeChambeau took an outrageous line on the 565-yard, dogleg par-5 at the Arnold Palmer Invitational not once, but twice. It’s safe to say the fans were excited over his two 370-plus-yard drives.

On to the Players Championship. Call it the fifth major or whatever you want, the event is one of the most exciting of the year. That combined with the Twitter star that is Ben An, and you’ve got yourself this funny viral moment.

Ok, ok. Perhaps it wasn’t funny for An in the moment. Carding an 11 anywhere is no laughing matter … until a few hours later. An handled it perfectly.

We’ve always had the Masters to look forward to in April, but now we have the Augusta National Women’s Amateur as well. Before we get into that, we must address the two former World No. 1’s who re-entered the winner’s circle.

On to Masters week. After breaking the color barrier at the Masters in 1975, Lee Elder made history at Augusta once again in 2021 when he joined Jack Nicklaus and Gary Player as an honorary starter.

Will Zalatoris turned heads all week at the Masters, not just because he was contending. People noticed that he resembles one of the caddies from Happy Gilmore, and even Adam Sandler got involved in the bit.

There were a handful of humorous moments at the 2021 Masters, but this moment from Hideki's caddie was as wholesome as they get.

The morning after his Masters victory, Mastuyama was photographed looking like any old guy at the airport ... with the addition of a green jacket, of course.

The Masters may have ended on the 11th, but there were still a handful of big golf moments later in the month. For instance, the birth of the famous LPGA hoodie.

The Player Impact Program news broke in April, as well. Golf Twitter hasn't been the same since.

And finally, Tiger posted his first photo since his accident on April 23.

The PGA Championship provided a plethora of viral moments, starting with Phil and the drone. Hey, when you’re on your way to becoming the oldest major champion of all-time, you can request whatever you want.

It wouldn't be a proper golf tournament without some sort of Brooks and Bryson interaction, which is exactly what we got at Kiawah. That came in the form of a leaked video. It’s been taken down from most platforms, but I was able to find one living copy of it here.

I could've dedicated this entire article to viral Brooks and Bryson moments from 2021, but you can learn all about that here. And for our last PGA Championship viral moment, Phil took to Twitter to celebrate his win.

June got off to an unfortunate start when Jon Rahm tested positive for COVID-19 with a six-shot lead at the Memorial.

Then things took an interesting turn when the Premier Golf League published this open letter to the world of golf. I'm still not entirely sure what to make of it.

On to the U.S. Open. First, Viktor Hovland withdrew due to sand in his eye and then wrote a hilarious Instagram caption to explain the situation.

And then outgoing USGA executive Mike Davis caddied for marker Jason Gore in Round 3.

Last but not least, Phil Mickelson spent some time with Kelley Cahill Rahm and Kepa Rahm while Jon hit balls in case of a potential playoff.

Nelly Korda capped off the month of June by winning her first major at the KPMG Women's PGA Championship and becoming the World No. 1.

Check out that hair. Next up, we have some golf action in Tokyo.

Relatable. And although Patrick Reed got a late start, he arrived to the games in style.

It's safe to say it was REALLY hot at the women’s Olympic golf tournament. So hot, in fact, that some players wore cooling vests to combat the extreme temperatures.

Some golf moments seem like they happened just yesterday. Rory throwing his 3-wood at Liberty National is one of those moments.

The month of team golf. Let's kick things off with a look back at the Solheim Cup. It's safe to say it was a fun time, and the European Team went back-to-back.

Up next: iron covers. I know most of the golf world shuns them, but we found one exception in September. Pro Aaron Rai uses them, and for good reason.

And now over to the Ryder Cup. There were a lot of viral moments that occurred at Whistling Straits, so for time's sake, I'll present each without comment.

Bryson got a lot of attention in September, as he competed in the World Long Drive after the Ryder Cup.

On October 16, K.H. Lee, a golfer who I previously knew very little about, became my hero.

Next up is Brian Morris, the head pro at Ocean View Golf Course in Bermuda, who is battling inoperable brain cancer and teed it up in the Bermuda Championship.

First up is Rory's ripped shirt at the European Tour finale.

And just when we thought that would be the biggest golf moment of the day, Tiger posted this.

A week and a half later, Tiger had his first press conference in nine months in November at the Hero World Challenge.

The Hero World Challenge was still underway when the calendar turned to December, and all of Golf Twitter lost their minds when Tiger was seen hitting balls in Sunday red.

Three days later, Tiger committed to the PNC Championship, and the golf world once again exploded.

And as an early Christmas gift, the PNC provided a number of viral moments for all the golf lovers out there.

And finally, I'll leave you with this PGA Tour-DP World Tour collab that is so, so good. Happy New Year, everyone. Here's to more golf virality in 2022.