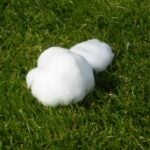 What is that stuff? Glad you asked!

The average round of golf raises a bunch of questions.

Why am I slicing? Where’s the beer cart?

What’s that white foam on the fairways?

Matt Guilfoil is the superintendent at Desert Canyon Golf Club, in Phoenix, and co-host of From the Jingweeds, a podcast dedicated to the turf-care trade.

We asked him for the lowdown on that stuff that looks like shaving cream, as well as two other common products used by maintenance crews that most golfers probably can’t identify.

No doubt you’ve seen those frothy dots in the fairway. From a distance, they could almost pass for golf balls. Up close, they look more like dollops of shaving cream. Pesticide? Herbicide? Nope. Marking foam. As the name suggests, superintendents use it to mark ground they’ve already sprayed, so they don’t inadvertently double up on tasks.

The foam is nothing more than soap and water — “basically, detergent,” Guilfoil says — dispensed from containers on the side of spray rigs. Simple and effective, with one catch: In very hot weather, the foam vanishes in an eye-blink. “I can be marking a par-5, and by the time I get to the green, I look back and the markings are all gone,” Guilfoil says.

2. THOSE GREEN-ISH-BLUE-ISH STREAKS ON YOUR BALL

It doesn’t happen often, but it’s memorable when it does: Picking up your ball, you notice that it’s slicked with something aqua-hued, almost iridescent. When it gets on your hands, it gives your fingers enough of a radioactive tinge to make you wonder if you might soon grow three heads.

Not to worry! Superintendents can be sadistic with pin positions, but they have no interest in exposing you to harmful chemicals. Almost without exception, Guilfoil says, what you’re looking at is colorant, a benign pigment used to help keep the greens looking, well, green. Usually, it dissipates from the putting surface within a day

3. THOSE TINY GRANULES ON THE GREENS

Not to be mistaken for a light top dressing of sand, which is laid down in an even, uninterrupted coating. These are little pellets, scattered around the putting surface. In some cases, they are fertilizer granules, but usually not, as most superintendents use either liquid fertilizer or granules that they water into the turf.

Likely, the little pellets are gypsum, applied to break up salt and other gunk that collects on the turf — an unwanted buildup that is especially common on courses that irrigate with repurposed water. How do you know for sure that it’s gypsum? Usually, the granules are grayish white, though sometimes they’re tinted a darker color to blend in with the turf. Another way to tell is with your nose. “It smells a bit like oatmeal cookies, like someone’s baking something pretty good,” Guilfoil says.

PGA Championship picks to win: Here’s who our staff is betting on at Southern Hills