How golf courses repair battered practice ranges so quickly, according to a superintendent 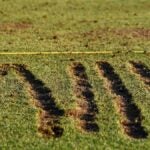 Someone's got some work to do.

Like wannabe Ben Hogans, we golfers hit the range seeking answers in the dirt. This can be hard work. But it’s nothing compared to the time and effort put in by superintendents caring for the practice turf that we chew up.

Ranges take a licking.  How to keep them ticking?

Jeremy Hreben is the superintendent at Indian Springs Country Club, in New Jersey, and a longtime member of the Golf Course Superintendents Association of America.

We asked him what he does to help the grass on his range recover quickly, and whether there are lessons in his labors for those of us tending to heavily trafficked lawns at home.

The first trick of the trade is the most obvious one: move the hitting area around so the same patch of turf doesn’t take a repetitive beating. “If you picture a range tee as a rectangle, we open a single lengthwise section one day, then move it forward the next day, then forward again the day after that,” Hrebren says. And so on, until the cycle renews.

Recovery time depends on turf type and climate, among other variables, but Hreben says it usually takes a week to a week and a half before a section is ready to be used again.

Because well-nourished grass recovers faster, Hreben gives his range a good amount of food, applying more fertilizer to it than he does most elsewhere on the course. Two of key ingredients in these meals are nitrogen, which promotes growth and a green color, and phosphorous, which helps with root growth and germination.

Most experts would argue that courses play better when they’re firm and fast. Hreben agrees. But not on the range, where he shoots for slightly softer turf. It’s a modest modification, so minor that the average golfer wouldn’t notice. But instead of sand, which is great for drainage, Hreben mixes in material like peat moss and mushroom soil, which help retain moisture, promoting growth.

4. Can you apply these practices at home?

A lot of lawns get plenty of use and abuse, but the wear and tear they take tends to come in the form of heavy foot traffic, which is different from the battering ranges endure. “Heavily used lawns are really more like the walk-ups to a tee box that are getting trampled on over and over,” Hreben says.

In those cases, where the ground gets compacted, common remedies include punching and sanding to promote air flow and drainage.

In short, Hrebren says, “you’re probably not going to approach problem areas at home in the same way as a range.” Unless, of course, you install at outdoor hitting net and transform your yard into a practice tee.