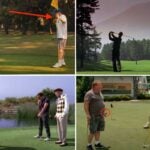 Golf frequently plays a supporting role in film and television, even if all the little details aren't always quite right.

From Caddyshack to Happy Gilmore and beyond, Hollywood has a long history of depicting golf in an absurdist light. We’ve got no beef with that, so long as absurdity is the intent. But there also are an abundance of movies and TV shows featuring golf scenes that strive for realism, only to unwittingly get the details wrong. In most cases, the mistakes are innocent enough, but to discerning golfers they stand out like a quadruple-bogey on a scorecard. And the Oscar or Emmy for Inaccurately Portraying Golf goes to…

In this charming story about hard luck, love and loneliness in Hollywood, a pair of industry losers play a casual round of golf. We know that they are losers because at one point, one guy asks his partner to “tend the pin” on a straight-ahead 10-footer, and his partner obliges without giving his buddy grief.

On a sylvan course southwest of Tokyo, a solitary character played by Bill Murray smacks a drive into the distance, with the outline of Mt. Fuji looming in the backdrop — a beautiful, silent scene with one glaring error: customarily, a tourist in Japan would never be permitted to play without a caddie.

The Wolf of Wall Street

“I had just had that driving range sodded with Bermuda grass,” Jordan Belfort’s wife, Naomi, screeches at him after her gazillionaire husband damages the practice grounds at their Long Island manse by landing a private helicopter on it. “Oh, my god! You had to deal with the golf course people, too!” Belfort responds, sarcastically, when obviously what he should have said was, “Honey, Bermuda grass is a cold-climate turf variety that no one would ever plant in Long Island because it has zero chance of surviving so far north.” A cap-tip from our awards committee to @GolfUniltered for calling our attention to this other golf-related inconsistency starring Leo DiCaprio’s Jordan Belfort, whose golf bag contains an ungodly load of cold, hard cash — and a head-scratching mix of left- and right-handed clubs.

In this early-90s action thriller, Michael Douglas’s mid-life meltdown character is trespassing on a Los Angeles country club when he is confronted by a pair of geezer golfers, one of whom is sporting a salmon-and-pink getup with a plaid pom-pommed tam o’ shanter, while the other wears a green-tinted visor, robin’s egg-blue slacks and a yellow sweater vest. We get it — golfers aren’t always the most stylish bunch, but c’mon…that ridiculous cap? No swank LA club would allow it, even in the ’90s.

In this touching father-and-son exchange, young Kevin uses his caddying money to buy lunch for his dad, a sweet moment spoiled by the fact that no country club like that would accept cash.

Three harmless-looking men, all wearing golf gloves, are practicing on the putting green of a crowded course when the fourth member of their group approaches with an offering of, ahem, a certain kind of brownies. The brownies look genuine, but who wears a glove on the putting green?

No disrespect to Miguel Angel Jimenez, but the greatest ball-striker with happy feet has got to be Fred Astaire in this enchanting scene from a 1930s classic. Watch him cut a rug while smoothing irons and woods, and try to ignore the fact that he’s wearing his glove on the wrong hand.

Check out the crew from Entourage, making the most of their sweet simulator setup. Too bad their boy Turtle fails to simulate the golf world as we know it. Like Fred Astaire before him, he, too, is a right-handed player swinging with a glove on his right hand.

When super-agent Ari Gold plays his trainer in a cutthroat money match, the trainer brings alongs his club pro, one Phil Mickelson, as a guiding light. It’s one thing to allow Lefty to tag along for moral support, but there’s no way any self-respecting high-stakes gambler would let his opponents get away with this clear violation of Rule 10.2b.

When another group hits into him and his playing partner, Paul Giamatti’s schlumpy and disheveled character returns fire at the offenders, rattling a low-liner from a distance off their golf cart. Nice! But are we really expected to believe that this swing could produce such a stunningly accurate stinger?

I Love You Man

This golf fanatic's mind-boggling milestone will make you deeply envious

The secret to making Whistling Straits' show-stopping lamb entree, according to the course's chef