18 Most Memorable Golf Movie Scenes of All Time 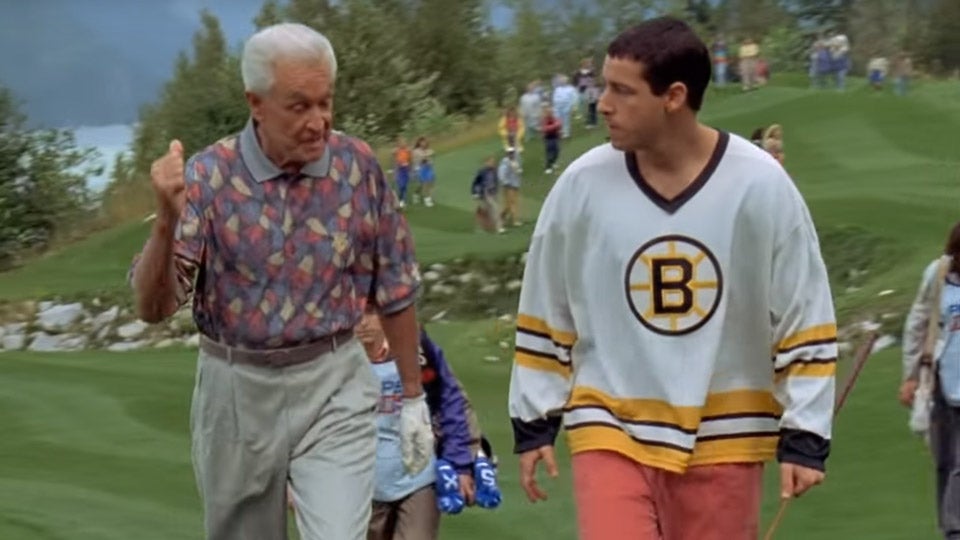 Golf movies are like golf swings. There are good ones, and bad ones. For better or worse, some live on in our minds. With that, we give you our version of the Oscars: the 18 most memorable golf film scenes of all times.

No translation needed for this wordless scene that finds Bill Murray alone on a tee box in Japan, framed in the distance by Mt. Fuji. Birds chirp in the backdrop but all else is silence. What’s conveyed is a truth about golf, and life and movies: the most beautiful moments are often left unsaid.

Cover your ears and hide the kids. There’s foul language in play as Colm Meaney’s character, Larry, gives swing tips to his buddy, Bimbo, as played by Donal O’Kelly in this Irish comedy. They’re both wearing denim, so call it blue-collar golf with a very blue streak. [WARNING: Video contains strong language.]

When you hear that Adam Sandler is one of Hollywood’s highest earners, hauling in approximately $20 million per movie, it’s easy to conclude that he’s grossly overpaid. But then you watch a scene like his rock-em, sock-em rhubarb with Bob Barker, and you start thinking: maybe, in this instance, Sandler’s price was almost right.

JACKASS: THE MOVIE: The Airhorn Scene

Quiet on the tee? Not when the brainless boys from Jackass keep blowing an airhorn during people’s backswings. It’s not high art. Just low-brow humor. But when angry golfers start retaliating, a cheap gag hits its peak.

Looping is an odd job for an assassin, and sure enough, things get tense and weird in this match between James Bond and the villainous Goldfinger, who has his henchman, Oddjob, on his bag. It’s a slow-moving scene — we’re talking PGA Tour slow — but watching Sean Connery makes it all worth it. As 007, he keeps his cool, even as others lose their heads.

THE GREATEST GAME EVER PLAYED: “Read it, roll it, hole it.”

The camera settles on a nervous golfer, standing almost frozen over a four-foot putt. Kevin Na? Jim Furyk? Both good guesses. But the period attire is a dead give-away. This is Francis Ouimet, as played by Shia La Beouf, competing in the 1913 U.S. Open. He might still be standing there today, frigid as a statue, had his young caddy, Eddie Lowery (played by Josh Flitter) not given him advice we all should go by: “Read it, roll it, hole it.” If only more of us would do the same.

Remember that time you and three buddies ate cannabis-laced brownies before lighting out to the golf course, where you wound up doing snow angels in a sand trap? Never happened? That’s just as well. Because this is what it would have looked like if you did.

NAVY SEALS: The Few, the Proud, the Ridiculous

In our search for the moment when Charlie Sheen’s career went off the rails, we settled on this scene from Navy Seals, a musical montage so riotously bad that we just had to show it to you. We can almost picture the director standing off-camera, yelling, “Cut! No, NO! Do it again! And next time, make it even stupider.”

SWINGERS: “You didn’t get the Goofy call back?”

In this comic tale of thwarted aspirations, two unemployed Hollywood actors whine about their families, love lives and careers. On the other hand, they seem perfectly content to play exquisitely bad golf.

To play good golf, it helps to have great footwork. It also doesn’t hurt to be Fred Astaire.

Put a firecracker like Katharine Hepburn in the airless environs of an uptight country club, and you’ve got the makings for some serious combustion. Witness this scene, in which Hepburn, playing a feisty amateur golf star, puts on a furious driving demonstration that would make Butch Harmon proud. Note: she performed all the golf-related stunts herself.

SIDEWAYS: “What’s with the hostility, man?”

The movie title is a metaphor for the errant routes we take in middle age, but in the dripping-with-frustration golf course scene, things go sideways in the literal sense.

We all have bad days on the course. But rarely do they get as nasty as this. Many lessons can be gleaned from Michael Douglas’ mid-life meltdown in Falling Down. Perhaps the most important: when a guy walks up your fairway with a pump-action shotgun slung over his shoulder, wave him through.

TIN CUP: No Laying Up

Does life imitate art, or the other way around? In the closing moments of Tin Cup, Kevin Costner is playing Roy McAvoy, an all-or-nothing journeyman vying for the U.S. Open title. But he might just as well be mimicking John Daly. No matter how you view it, the scene is right.

“This is the best round of my life,” Bishop Fred Pickering exults in Caddyshack as the skies open above him. It’s also the last round of his life, and one of the best golf snippets in movie history.

We all know that golf can be wonderfully absurd, but nothing better captures its sublime ridiculousness than this comical range session, in which Roy McAvoy’s caddy cures his man of the shanks by having him shift spare change in his pockets. The Johnny Miller cameo is a nice touch, too.

CADDYSHACK: Fore? “I should have yelled two.”

As this juncture, we would like to point out that two of our top three candidates for greatest golf movie scenes of all time come from Caddyshack. So what? So, let’s dance!