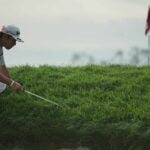 The interest really ramps up in advance of elite tournaments, when golf courses work toward getting their rough long and thick and mean, like the juicy stuff we’re seeing at the U.S. Open at Winged Foot this week.

How do they do it?

One important step is to mow less often.

But that’s not all. Not even close.

1. Prep the grass in fall

Maintenance practices vary from one region to the next, according to such factors as climate, grass varieties, soil types and more. But all top-flight tournament setups require long-term planning. At Firestone, where the rough is a cool-season medley of bluegrass, rye and fescue, preparations for the late-summer WGC begin the previous fall. As autumn approaches, Napora and his crew make their rounds of the rough, looking for bare patches and any other areas in need of extra TLC.

“The goal is to get the grass well established before winter, so that it’s nice and lush and healthy when it comes back in the spring,” Napora says. Because grass seeds won’t take root if you simply spread them over dead turf, part of the job involves raking any dead patches clear so that seeds fall on friendly soil. But Napora and his crew don’t stop there. They also slit seed, using a machine that does exactly that: it cuts slices in the ground, dropping seeds into those slits as it goes.

This is beneficial for a couple of reasons. Not only do the seeds have a better chance of finding a healthy, happy home in the soil, but they also have less chance of being gobbled up by birds and other creatures that feast on seeds that have been scattered on the ground.

2. Juice the grass in spring

Come early April, as the weather warms and the grass reawakens, Napora and Co. get back at it, treating the grass with both fertilizer and weed control to prevent aggressive crabgrass from intruding. A month or so later: They deliver an application of insecticide. By now, the golf season is in full swing and the grass along the fairways should be hale and hearty but Napora doesn’t let it get overly long. Not for everyday play, anyway. He and his crew keep up their routine mowing. For everyday play, they keep the rough at 2 and a quarter inches. To maintain it at that height, they mow it twice a week.

About six weeks before the tournament, they hand-water and fertilize around the banks of bunkers, because those areas tend to endure a lot of stress with foot traffic and other wear and tear. About three to four weeks before the tournament, the entire rough gets fertilized yet again. At that point, Napora says, it’s nice to get some rain, which helps kick the fertilized grass into overdrive. If no rain falls, Napora can always increase his irrigation. But, he says, “no matter how much water we throw down, there’s nothing better than mother nature’s water.”

Come Sunday of the tournament, Napora says, the Tour wants the rough to be 5 to 6 inches tall. Working backward, that means he needs to have the rough at around 3 inches on the Saturday before the competition begins (though grass grows at different rates depending on the weather, among other factors, roughly one-fifth of an inch per day is a good rule of thumb). To get the grass to three inches, the crew simply stops mowing for a week.

To mow the rough, he and his crew use rotary mowers, not reel mowers, because rotary mowers prop up the grass as they cut, leaving the turf tall and proud. On the Wednesday before the tournament, the Tour inspects the rough one last time. If it has grown too quickly and needs a little trimming, Napora and his crew oblige. But otherwise, that’s it.

Once the competition kicks off on Thursday morning, the greens will be mowed and rolled daily. But the rough will be left to hold up on its own, standing upright astride the fairways, supplying tangled lies for errant shots and providing a key defense against the best players in the world.

Zozo Championship expert picks: Who our staff thinks will win