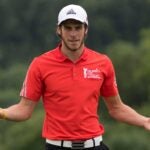 Bale's new club has apparently embraced his love of golf more than any other.

World-famous footballer Gareth Bale is a golf sicko. He’s absolutely obsessed. We love that and can’t blame him at all.

His obsession with the game has come under scrutiny in past years as his recreational play has flourished while his professional play fluctuated. But that criticism doesn’t exist anymore. Not with Bale at Tottenham. The Welshman is playing on loan with the Premier League club, and according to one teammate, he’s as happy as he’s ever been, largely due to golf.

Sergio Reguilon spoke with Cadenaser, a Spanish radio network, and said that the club has created golf holes on property at the training center. The main reason? Bale’s existence, it seems. Region says Bale seems very happy and is being encouraged by the club to get his golf in. Resembling a shoe you’re more likely to see a linebacker or running back, the Adidas Code Chaos BOA spikeless golf shoe is a revolutionary spin on what it means to be a golf shoe. The Code Choas BOA comes with a Chaos Traxion with Twist Grip soft rubber outsole for an exceptional grip, a Torsion X stability bar that sports tremendous footing from the ground up, and a responsive Boost midsole created with FitFoam. Combined you a mid-height golf shoes designed to keep even the biggest swingers grounded and under control. When it comes to comfort, it’s provided with a textile lining and an INSITE sockliner that maximizes balance. The bold and vivid textile upper offers water protection to keep your feet dry and also contains a textile collar and L6 Boa Fit System for a precision fit that stays that way via the Boa dial, securing your foot for a sock-like feel. If the electric/green black combo is too much for you, the all-white model is much more subdued.
Buy Now

“What most surprised me is at Spurs’ training ground there are golf holes,” Reguilon said. “I asked about it and they told me they were put there for him! They’re short holes, maybe 30 metres. I couldn’t believe it!”

Sounds like a delightful short-game facility Tottenham have had installed. If it’s anything like the replica short holes he’s had built at his house, he’s gonna be in great shape. We scoured the internet for photos of the short game area, but haven’t found any just yet. Tottenham has only shared a video of their basketball setup, with Bale stroking a jump shot.

Will we see him smooth a wedge in tight? It feels like only a matter of time.